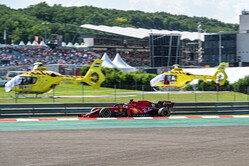 The Friday of the Hungarian Grand Prix saw the hottest conditions of the season so far, with air temperature hitting 33 degrees Celsius in the afternoon session and the track going past 60. In these difficult conditions, teams focussed mainly on evaluating tyres for qualifying and the race.

Over the course of the two hours of track time, the Scuderia drivers evaluated all three Pirelli compounds on offer in Hungary, while running various fuel loads so as to gather as much data as possible. In the morning, the two SF21s completed 47 laps between them, 24 for Carlos and 23 for Charles. Sainz was fourth fastest with a 1'18"115 while Charles encountered traffic, which explains his 1'18"391, which was the seventh best time. A further 62 laps were added in the afternoon, 30 for Leclerc and 32 for Sainz. The Monegasque's best time was a 1'18"370 and the Spaniard posted a 1'18"441.

The final free practice session takes place at 12 CET tomorrow, in preparation for qualifying, when the weather is expected to be changeable with cooler conditions.

Carlos Sainz: Today was a tricky Friday. FP1 was a decent session but FP2 proved to be a bit more complicated. The car didn't feel any worse, but while the others managed to improve, we went backwards.

This is something to analyse before tomorrow, when there is some risk of rain and things could get interesting.

Charles Leclerc: It was a good day. We went through our planned programme and I was quite happy with how I felt in the car. The conditions changed slightly from FP1 to FP2, but we did a good job in both the qualifying and race simulations. What we need to focus on the most is our qualifying performance. It will be quite tricky to overtake, so we have to be a bit stronger here on Saturday than we have been recently at some of the other circuits.

It was very warm today, and all of us had to adapt to the heat in our cars. But the temperature can also affect other things, such as tyre management. It looks like the weather could be variable for the rest of the weekend, which could mix things up again.