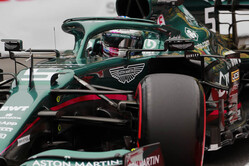 Retained for 2022 by Aston Martin, four-time world champion, Sebastian Vettel insists that his seat was never in doubt.

At a time Haas and Alfa Romeo appeared to be the only teams still to confirm their 2022 line-ups, there remained a question mark over the second seat at Aston Martin.

Though the Silverstone-based outfit had issued a press release on 10 September last year stating that Sebastian Vettel had signed for "2021 and beyond", it has become the norm to take such proclamations at face value and take contract dealings one season at a time.

Though the German is showing a marked improvement on his 2020 form - which wouldn't have been difficult - he has taken time to settle in at his new team.

Adding to the mystery as to why it was taking so long to confirm Vettel for a second season, both parties appearing unusually evasive on the topic, was paddock gossip following Lawrence Stroll's lunch with Fernando Alonso's manager, Flavio Briatore.

Last week, Aston Martin officially confirmed Vettel for 2022 alongside Lance Stroll, asked at Sochi today whether there was any doubt that he would be retained, the German's response was a straightforward: "Not really.

"I think in the end the excitement for next year, the new cars, the new regs and where the team is going, everything looks very promising," he added.

"We don't know until next year," he continued, "but it's great to be part of that.

Asked what convinced him to continue, he responded: "The driving, the competitiveness, obviously I love driving, I love winning.

"Next year, a lot of things are changing," he added. "I don't think anyone is guaranteed to win but I think the challenge of working with the team. The spirit in the team is great, I like the guys. It's been a great season... maybe not in terms of results but in terms of working. Morale is high so a lot of things that excite me.

"Obviously, there are some things that over the period of so many years you enjoy less, like being here now answering questions," laughed.