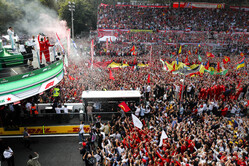 A poor turnout for this year's Italian Grand Prix has cast doubt on the future of the event.

As has been the case at other races this year, there was a limit on fans attending the event due to the ongoing pandemic. As a result attendance was capped at 55,000.

However, with public standing areas closed meaning that fans had to buy tickets for the grandstands, only 16,000 tickets were sold on race day.

Though Ferrari isn't challenging for the title and therefore wasn't expected to win, this doesn't usually prevent the tifosi from attending. However, it is thought that perhaps this, coupled with the high prices of the grandstand tickets contributed to the poor turnout throughout the weekend.

"Why so little public in Monza?" asked Jean Todt of Gazzetta dello Sport. "During Friday's qualifying I was disappointed looking at the stands."

Hinting that the future of the event could now be in doubt, he added: "I would be disappointed if there wasn't at least one race in Italy on the Formula 1 calendar for the next few years. But it is a question to ask Stefano Domenicali."

"We are discussing with the organisers precisely to understand how to relaunch the grand prix," the F1 boss responded. "I find it hard to think of an F1 without Monza, but events are also business and there must be an economic return that justifies them."

At present, Monza has a contract to host the Grand Prix until 2024, but with an eye on the financial hit the sport has taken over the last two years there will be pressure to find venues that can meet the sport's financial demands, and this is increasingly outside Europe.

In his debrief for the official F1 site, Ross Brawn sung the Autodromo Nazionale's praises.

"Monza is an amazing venue when it's full because the fans are so fantastically loyal," he wrote. "While Ferrari didn't win, there would have been huge love for Daniel's triumph, given his Italian heritage. The tifosi would have had a hero to follow.

"I've been lucky enough to stand on that rostrum that hovers over the circuit, when Ferrari have won with the crowd below you," he added. "It's difficult to describe the emotion.

"I hope next year, the world is back to normal and we can see the return of Monza's unique spectacle."