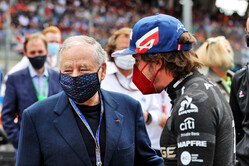 FIA president, Jean Todt has apologised to race fans for Sunday's shambles, revealing that the F1 Commission will discuss how events unfolded in October.

Other than why the race couldn't be brought forward a couple of hours, delayed until Monday or postponed until a later date, the sport must look into why (half) points were awarded to drivers after completing three laps behind the safety car.

"This year's Belgian Grand Prix presented extraordinary challenges," said Todt in a brief statement issued this afternoon. "The weather windows predicted by the forecasters did not appear throughout the day, and while a small window did appear late in the day during which there was an attempt to start the race, conditions quickly worsened again.

"Therefore, due to the lack of visibility created by the spray behind the cars, we could not run the full race in sufficiently safe conditions for the drivers, marshals as well as the brave spectators who waited for many hours in the rain, for whom I am very sorry.

"The FIA, together with Formula 1 and the teams, will carefully review the regulations to see what can be learned and improved for the future.

"The findings, including the topic of points allocation, will be added to the agenda of the next F1 Commission meeting on October 5."

The F1 Commission, which comprises the FIA, the commercial rights holder and the teams, is an official rule making body.

Between them there are 30 votes - 10 for the teams, 10 for the FIA and 10 for F1 - with a majority required for regulation changes to be put before the World Motor Sport Council.

Since Sunday's events, the sport has come in for harsh criticism in the mainstream media, which has widely quoted Lewis Hamilton and Sebastian Vettel, both of whom suggested that those fans attending Sunday's event should be refunded.