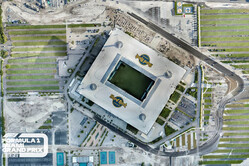 Miami Grand Prix organisers have announced the appointment of Richard Cregan as Chief Executive Officer, along with other members of the management team.

"Together, the Miami Grand Prix team will create a spectacular new circuit and innovative customer experiences to be constructed within the Hard Rock Stadium sports and entertainment campus in Miami Gardens," said organisers in a statement today.

Richard Cregan, who has been appointed CEO, started working for Toyota Team Europe in 1985, rising from a mechanic to General Manager of Toyota Motorsport and Team Manager for F1. During his 24-year career at Toyota the team won seven World Rally Titles, finished second at the Le Mans 24 hour race and had multiple successes in F1.

In 2008 he was offered the position of General Manager and in 2009 became CEO of Abu Dhabi Motorsport Management, the company, responsible for the Abu Dhabi Grand Prix and the development of motorsport in the UAE.

In 2013, the promoters of the Russian Grand Prix recruited Rasgaira, the consultancy company run by Cregan, who subsequently played a key role in attempting to return F1 to Las Vegas.

"We have high standards on what we expect to deliver in Miami for F1 teams, drivers, sponsors, and fans," said Managing Partner of the Miami Grand Prix, Tom Garfinkel. "The first goal is to have great racing and we believe we are building a circuit that will deliver just that. We are fortunate to be able to bring in someone with Richard's experience to lead a hand-picked team with proven results creating best-in-class racing circuits and fan experiences."

"Miami has been a dream destination for Formula 1 over many years," said Cregan, "and it is a privilege to accept the role of CEO. Working within the world's most vibrant market for sports, the USA, and joining a team anchored by the world-class talent at the Miami Dolphins, means that I am understandably thrilled by the potential of what we can achieve together when we welcome F1 to Florida in 2022."

Mark Boyd in the role of VP of Operations. Boyd has experience working at both Abu Dhabi Motorsport Management and most recently at the Vietnam Grand Prix.

Ashley Davies in the role of VP of Strategy. Davies brings 20 years of experience as Deputy CEO of the Australian Grand Prix and Director of the Advisory Board to the Vietnam Grand Prix.

Andy Beaven in the role of Sporting Director. Beaven was most recently Head of Sport at the Abu Dhabi Grand Prix.

Dorie Grogan in the role of VP of Fan Experience. Grogan moves over from the Miami Dolphins where she held a similar role working on the Dolphins event business, including the Miami Open tennis tournament.

Josh Young in the role of VP, Ticket Sales. Young moves over from VP of Ticket Sales for the Miami Dolphins and previously held ticket sales management positions at LAFC and the Cleveland Browns.

Lauren Kelly in the role of Director of Marketing. Kelly moves over from a similar role at the Dolphins.

Katie Foreman in the role of Director of Partnerships. Foreman moves over from a similar role at the Dolphins.

Jeremy Walls in the role of Chief Revenue Officer. Walls adds the Miami Grand Prix to his other revenue responsibilities at the Dolphins.

Jason Jenkins in the role of SVP, Communications and Community. Jenkins adds the Miami Grand Prix to his responsibilities at the Dolphins.