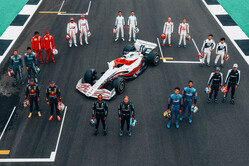 Amidst the fanfare surrounding the biggest overhaul of the rules in living memory, Nikolas Tombazis warns against expecting instant results.

Much like the British government's so-called 'Freedom Day' next Monday, when citizens expected to finally break free of the various restrictions imposed as a result of Covid, the FIA's head of single-seater matters, Nikolas Tombazis has admitted that next year's massive aero rules overhaul may not result in an instant improvement to the racing.

"We expect to see closer racing, but maybe not from the very first race," he said at today's unveiling of the look of 2022, "because maybe somebody will get the new rules right and somebody wrong.

"But very soon we expect to see a closer level of competitiveness between the cars," he added, "and cars being able to follow each other more closely.

"It won't happen overnight," he warned. "We will obviously study what solutions the teams produce, and we will keep working at it, to improve. But we believe over time the racing will improve sizeably."

In what some may well see as yet another caveat, he warned that the rules overhaul may not improve overtaking, merely allow cars to follow more closely.

"It's not so much actual overtaking, but how close they race," he said. "So being able to follow each other, fight each other throughout the race. So that's what we've been trying to do, mainly acting on the aerodynamics."

"This is the start of a new journey," added Ross Brawn, "a new philosophy, a new culture, where the raceability of these cars is going to be vital to the future of F1.

"Why do we do that?" he continued. "We do that because we want to entertain the fans, we want to engage the fans and we want new fans to come into the sport.

"This is a unique new chapter in our sport. And these regulations have evolved to make F1 the absolute greatest racing spectacle, and to push our sport to the very forefront of global culture and entertainment.

"It feels like a very long time ago the FIA officially unveiled the regulations for the future of the sport, but after the one-year delay due to the pandemic it's only 170 days to go until the start of 2022 when we will see the next generation of cars take to the track.

"There is huge excitement ahead of this new era, and while 2021 has been a great battle we still have cars struggling to follow each other during the race. The regulations for 2022 will address this problem and create an opportunity for closer battles and more wheel-to-wheel racing.

"The combined effect of the new aerodynamic regulations and financial rules, in the form of the cost cap, will create the conditions for a more balanced championship and for the gaps across the grid to close."