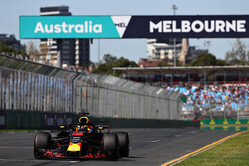 Officials in Australia reveal that that the Melbourne event is to lose its 'traditional' slot as the season opener.

This year, as in 2020, Melbourne was scheduled to host the opening round of the Formula One season, a prestigious slot it has held for all but two years since it joined the schedule in 1996.

However, Covid took its toll; with last year's race cancelled just hours before the opening practice session, and this year's race postposed from March until November until yesterday's official cancellation.

At the press conference confirming the event's cancellation for a second successive year, it was revealed that Melbourne - which has a contract to host the race until 2025 - will almost certainly no longer host the season opener.

"We will start discussions with Formula One Management very shortly about next year," said Paul Little, chairman of the Australian Grand Prix Corporation, "and extensions based on being able to make up for the last two years.

"We're thinking April is a date that we would like to be able to make some positive moves on," he added.

Little admits that next year's date will still depend on the national and global situation in terms of the pandemic.

"Off the back of that we'll know a lot more about whether or not April is viable."

"We've been talking April with F1 for some time," added Martin Pakula, Victoria's Minister for tourism, sport and major events. "This year, other events went into that first and second race slot and I think F1 is keen to continue with those events being the first and second race of the year," he added, referring to Bahrain and Imola.

"So we've been looking at April for some period of time, it's not set in stone, and we'll continue those discussions.

"It's unlikely to be the first race next year but frankly, that probably suits us."

Abu Dhabi pays handomely for the privelege of hosting the final race of the season and it is likely that Bahrain will be equally happy to hand over the folding, especially due to the excitement surrounding the fact that next year's race will be the first chance for race fans to see how the rules overhaul affects the sport.