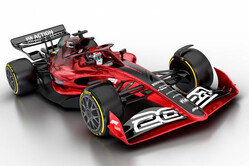 F1 fans will get their first taste of the look of 2022, when a full-scale model is revealed at Silverstone this weekend.

Though the 2021 championship is still underway, teams, even the big guns are turning their attention to next season, as the sport undergoes one of the biggest changes in its history.

In a bid to spice up the action whilst levelling the playing field, the aero rules have undergone a massive overhaul, which, among other things, will seriously reduce the effects of dirty air.

Though the first cars won't be revealed until February, at Silverstone this weekend fans will get a sneak preview of the look of 2022.

On Thursday, fans will witness F1 One Begins, which according to the sport's official website, is a "dynamic launch event that will take fans on a journey through the ages before arriving at the most futuristic racing car of all-time.

"Fans will not only get to see a life-size 2022 F1 car for the first time," it adds, "they'll also be talked through the machine's revolutionary design by a panel of experts, who will explain the thinking behind the new concept, which will enable drivers to race each other harder than ever before."