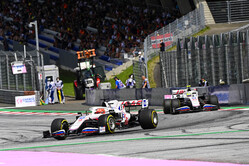 The American outfit, which is struggling at the back of the field has seen its drivers enjoy a number of close encounters this season, though thankfully the pair have yet to take one another out.

However, with the added pressure of Sprint Qualifying this weekend, which apart from anything else, could place further financial pressure on the struggling outfit, Guenther Steiner reveals that the pair have been told to keep it clean.

Asked, ahead of this weekend's British Grand Prix, if the opportunity to start a little higher up the grid on Sunday might lead to his drivers pushing that little bit harder in Saturday's sprint race, Steiner said: "For sure, the drivers will race hard because in qualifying everyone races hard and this is like a sprint race which defines the qualifying positions.

"On Sunday, when points are at stake, you want to be in the best position to start the race as you can," he added. "From our side, this year it's all about learning so running the race, having a few more race starts during the year because of sprint qualifying format will be an advantage next year.

"On the sprint, I will tell them to keep their noses clean and keep the cars on the track."

"I am looking forward to it," he admitted, "because it's something new and something new always gives opportunity and hopefully we can be a part of that.

"I think the success will be if the fans like it. At the moment I think it's a good format but if there's something we can enhance, and the fans embrace it, that would be good and then I would say let's do more of it."

"I'm not sure what to expect from the format," said Mazepin. "I think Formula 1 has kept the same format for quite a few years and it will be nice to get a new format to try out.

"With the current tires you need to plan the amount of laps you're going to be doing on them. Hopefully we can push flat out for the whole time as normally we do not get to do that. Potentially, every lap will be like a qualifying lap for that short period of time."

"With the new qualifying format, we will definitely need to approach the weekend differently," added Schumacher. "We only have one free practice session to set-up the car how we want it to be for the whole weekend. In FP2 we will try and learn something for the main event, but it will definitely be very different, it's going to be interesting."