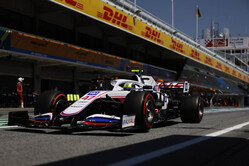 Mazepin and Schumacher entered Q1 with three sets of Pirelli P Zero Red soft tires each for three timed runs. Schumacher's first two sets netted the rookie laps of 1:20.309 and 1:19.405. On his third and final set of the softs Schumacher clocked a faster 1:19.117 to claim 18th on the grid for Sunday's race ahead of the Williams of Nicholas Latifi and teammate Nikita Mazepin. Mazepin banked a 1:20.560 to start his quali runs and he bettered that time on his third set of tires dropping his best lap to a 1:19.807 to place 20th ahead of Sunday's 66-lap race.

Nikita Mazepin: "The target temperatures were there for both my first and last run on the softs, the second one was a bit difficult. But when the time was there the temperatures really came towards us. It's our second, clean qualifying, so I'm pretty satisfied about it. On the other side of the coin, I'm not happy with the balance yet. I feel like the car is not really doing what I want it to do at the moment. It's quite difficult to drive it - it's a big task to keep it on the circuit while trying to maintain the best lap time possible. Loads for me to find but a clean qualifying is a good step forward as well."

Mick Schumacher: "We're really happy, it's been one of our best Saturdays and qualifying sessions. We managed to put the car where we wanted to, we made a big change overnight from Friday to Saturday. It was definitely the right one to do. I feel that the team and I have taken all the right steps to bring the car to where we are now. The predictions said we'd be behind Williams and here we are in front of one. We have to aim a bit higher though and try and get close to Q2, I think we're on the right path to try and do that. I think it's going to be tough in the race though. We're probably looking at a bit of rear degradation in the race - I think everybody is. I guess we'll have to wait and see."

Guenther Steiner: "From where we were yesterday, after FP1 and FP2, I think the whole team - the engineers, the crew, the drivers, they all did a good job. We've ended up in front of a Williams and that's what we're fighting for at the moment. We didn't get it done in Portugal, but we got it done here with one car with Mick (Schumacher). Nikita (Mazepin) made good progress today as well, as yesterday he obviously didn't have his best day. We just need to keep on bettering ourselves and climb forward - it's an on-going learning curve. Everybody is putting a lot of effort into it."