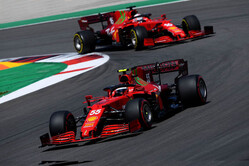 Scuderia Ferrari Mission Winnow's performance in the Portuguese Grand Prix did not live up to its expectations. After a good qualifying yesterday, only Charles Leclerc got into the points, finishing sixth. The Monegasque delivered a solid performance, crossing the line two places higher than his grid position, posting lap times similar to those of his closest rivals for the entire race. Unfortunately, a top ten result slipped from Carlos Sainz's grasp in the closing stages and he finished eleventh.

The second half of the race was particularly tough for the Spaniard. However, even before then, he had suffered a setback at the restart following the Safety Car brought out on the opening lap. Prior to that, the Spaniard had done a great job of passing Sergio Perez off the line, but he then dropped three places, ending up behind the Mexican, Lando Norris and Esteban Ocon. The second key moment came in the first few laps after fitting the Medium tyres on lap 21, in an attempt to undercut Norris who was very close. In this stage, it's likely Carlos pushed a bit too much and his tyre performance therefore dropped off in the closing stages, when he slipped down the order and out of the points.

The Portimao race data will now be analysed in Maranello to understand why the SF21 did not perform as expected, particularly on one of the Pirelli compounds at this race. The next chance to measure up against our rivals starts this coming week, when the World Championship moves on to the Barcelona-Catalunya Circuit for the fourth round of the season, the Spanish Grand Prix.

Charles Leclerc: I can't be satisfied with P6, and overall, I haven't been performing at my best this weekend. That said, looking at my drive in the race, I am happy with the job I did. I had a good start to the first stint, but then Carlos and I both struggled a lot with graining on the medium tyre, which didn't seem to affect the others so much. As a team, we have to understand what happened there.

A fifth may have been possible today, but I don't think we could have done much more.

Carlos Sainz: We didn't have a good day. Even though I got a good start, the race was very tough after the pit stop. During the first stint I was feeling very good on the Soft tyre behind Lando, Then, we tried the undercut by changing quite early onto the Medium and it didn't work. From there on, it was a big struggle to make it to the end with that compound due to the graining.

I'm disappointed, as I feel we had a good opportunity to score good points today. We will analyse the race, learn from the strategy, from the tyres and from the car behaviour. On to Spain.

Mattia Binotto: Today's result was not what we were expecting. We were unable to capitalise on the potential seen in qualifying and that cost us a lot of points in the Constructors' classification. Charles drove a very solid race, making up some of the ground lost yesterday. Carlos had a difficult race, especially in the second stint.

In just a few days, we are back in action in Spain. On a very demanding track like the Barcelona-Catalunya circuit, we will need to be prepared down to the smallest detail to make the most of our potential throughout the weekend.