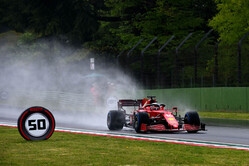 Scuderia Ferrari Mission Winnow picked up 22 points, courtesy of a fourth place for Charles Leclerc and a fifth for Carlos Sainz in the Gran Premio del Made in Italy e dell'Emilia-Romagna. While the race confirmed that the team is making progress, there's a hint of disappointment as undoubtedly, a podium finish was within Charles' grasp today.

The key moment of the race came when Valtteri Bottas and George Russell crashed at the first corner on lap 32, leading to the race being suspended. At the time, Charles was second, 25 seconds ahead of Lando Norris in the McLaren. The Monegasque had built up that lead driving very quickly and precisely on a track that was gradually drying out, helped by set up choices made yesterday with the engineers in qualifying to run with more aerodynamic downforce. The restart wiped out Charles' advantage and he was then overtaken by Norris and, with a few laps remaining, by Hamilton too.

Sainz also had a very good race. The Spaniard got away very well from eleventh on the grid, making up several places. He then made a few mistakes in the early stages, but once the track conditions stabilised, Carlos was able to match the pace of the quickest, just like his team-mate, in both wet and dry conditions.

Therefore, Scuderia Ferrari can leave Imola knowing that the work carried out on the SF21 has produced a definite step forward compared to last year's car. Furthermore, when compared to the race in Bahrain, the race pace at Imola matched what had been seen in qualifying, better than the closest rivals in the wet and similar in the dry.

Charles Leclerc: It was an interesting race, although a bit frustrating, because I was in a really good place before the red flag which wiped out the advantage we had built up in the first part of the race. Unfortunately, I struggled after the restart, since I was vulnerable in the straights and that made it difficult to fight or defend from others. In fact we had taken a bit of a gamble with some more downforce, which helped us in the rain, but made it more difficult for us when it was dry in the second part of the race.

Overall, I'm very happy with the performance we had today. There is definitely a lot of motivation. We are fighting for more interesting positions now and this is positive. We have been working well and if we keep it up, I'm sure that we will be fighting for the top places soon.

Carlos Sainz: That was a very solid race today. The conditions at the start were very tricky, with very poor visibility, but I went for it and managed to make up quite a lot of positions after the start. This was the second race and my first time in the wet with the car, which was an unknown situation for me, but taking risks and finding the limit paid off, despite losing race time with a couple of mistakes here and there.

My pace was very strong in the wet and also very solid in the dry, so I'm happy with that. I was quite comfortable all along, and starting P11 with a P5 finish is encouraging. I just need to keep my head down and continue working in this direction, because I think it's the correct one. Collecting solid points today was definitely good for the team and I am very pleased with the double points finish.

Mattia Binotto: On a completely different track and in very different conditions to the first race of the season, this result confirms that the work we are doing is going in the right direction. The fact we are unhappy about not getting at least one driver onto the podium is further proof of that. We can definitely say the outcome of these first two races is a positive one.

Not since the second half of 2019, specifically the races in Japan and Mexico that year, have we had both drivers in the points in two consecutive races. We must continue like this and show, race by race, that we know how to improve. Now I can't wait to go to Portimao for the next Grand Prix!