Next few races key for Ferrari 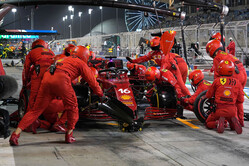 Pouring cold water on talk of a podium finish any time soon, Mattia Binotto says the next "three or four" races are key to Ferrari's season.

With 2020 being Ferrari's worst season since 1980, things were hopefully ever going to go one way in 2021. The Italian team's strong pre-season form was maintained last weekend when both drivers finished in the points.

However, not for the first time, Charles Leclerc belied the equipment at his disposal, both in terms of his qualifying performance and a superb start to a race in which he eventually finished sixth, two places ahead of his teammate.

While he is confident that this season will be an improvement on last, team boss Mattia Binotto has played down hopes of a podium finish any time soon.

"The gap is still very clear compared to the top competitors, which in the race still was big, so it was still a long way but it will depend as well track to track," said the Italian in response to being asked about his hopes for a podium.

"We know that we will not work much on the development of the car because we will focus on the 2022 in terms of design development," he continued. "I am pretty sure it is the same with the other competitors.

"But still I think that if we look at our race, we got feedback now from drivers, they start learning the car, start knowing what are the limitations of the car, and eventually we may address or we may improve it. So I think the next three or four races will first indicate what is the true performance and potential of our car compared to the others."

For once, off-season promises of an improvement, certainly as far as the power unit is concerned, appear to be proving correct.

"I feel relieved certainly because we may work in a better position, and that's very healthy for the team," said Binotto. "It's important that the team can work in a healthy condition, stay calm and positive, and for me that was important.

"So coming here, seeing the car has progressed, with the team somehow in a serenity, means we can work in a better manner. Engine, chassis, tyres, tools, correlation, all of that was important for us and basically that was key.

"How much is coming from the power unit improvement? I think it's difficult to say because it's so relative to the competitors. It's not an absolute value and I don't know the progress of the others, but we can only judge the entire package."

"Relative to expectations, as far as how it is compared to our simulation data, I think good correlations, that was important for us," he said. "It's something which we developed last year, to improve compared to where we were.

"So the car is performing as expected. How it performs, I think we have some ideas starting from the testing the winter testing of these three days. We knew we had a better car compared to last year, no doubt, relative to the competitors."