Red Bull prepared to lend out Albon to rivals 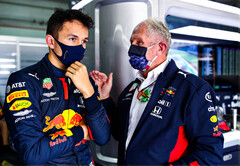 Helmut Marko reveals that Red Bull is prepared to lend Alex Albon to rival teams should the need arise.

Despite the various media driven predictions there is no genuine end to the COVID pandemic in sight. Consequently, certainly as far as F1 is concerned, rather than anticipating a record 23-date calendar, it might be wiser to accept that this year's schedule could well end up mirroring that of 2020.

With an eye on the possibility that there could be repeats of the situation Racing Point and Mercedes found themselves in, when Sergio Perez, Lance Stroll and Lewis Hamilton tested positive for the virus, Red Bull's motorsport consultant, Helmut Marko has admitted that a repeat of the situation could be a means of Alex Albon finding himself back in a race cockpit.

Dropped by Red Bull in favour of Sergio Perez, Albon, despite being named the team's test and reserve driver, is effectively on the sub's bench for the next twelve months, possibly even longer.

However, while the team insists that the Anglo-Thai driver will play a key role in developing the 2022 car, he could be made available to rivals teams should the need arise.

"We have assured him that we will use him massively in testing," said Marko. "After all, there are the 2022 tyres to test, and there are separate tests for that.

"He will do a lot of simulator driving and he will also be at many races as a reserve driver," he added. "After all, that involves four cars for us.

"The chances of him being used are there," he insisted. "In addition, we are prepared to lend him out if a situation arises at another team that they need a driver at short notice. Then he will get race kilometres. So it's not the end."

One of the key factors in choosing Perez over Albon was the Mexican's consistency, not to mention the latter's failure to significantly close the gap to his teammate over the course of the season.

"Lack of consistency and he got rattled too easily," explained the Austrian, "when, for example, the wind gained intensity or came from a different direction. Or when the tyres started to degrade, then he lost time disproportionately.

"It's certainly a mental story as well," he added. "But when you have a teammate who is permanently driving at the absolute top level, no matter what the car is like, it plays a minor role, I think.

"Of course, getting to the mental thing, all the reports and the unsatisfactory results have unsettled him. His gap to Verstappen actually increased over the course of the season, not decreased.

"It was marginal," he admitted, "but it increased."