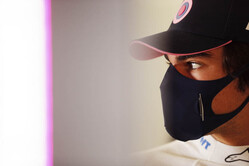 Lance Stroll has revealed that he tested positive for COVID-19 after the Eifel Grand Prix weekend, during which he was replaced by Nico Hulkenberg.

Complaining that he felt unwell ahead of Saturday's practice session, the team called on the services of Hulkenberg who had deputised for Sergio Perez at the two Silverstone races.

Hulkenberg arrived in time to take part in qualifying and next day went on to finish eight in the race.

Throughout, Racing Point made it clear that the issue was not COVID-related, the youngster thought to have suffered food poisoning or something similar.

Today, Stroll took to social media to reveal that he has since tested positive for the virus.

"I just want to let everyone know that I recently tested positive for Covid-19 after the Eifel GP weekend," he wrote. "I am feeling 100 per cent and have since tested negative.

"To fill you all in on what happened, I arrived at the Nurburgring after testing negative in the normal pre-race tests. On Saturday morning I started to feel unwell and woke up with an upset stomach. I followed the FIA protocol and self-isolated in my motorhome and did not re-enter the paddock.

"I wasn't fit to race so I flew home early Sunday morning. As I was still feeling under the weather I took a Covid test on Sunday evening.

"The next day the results came back positive, so I stayed at home self-isolating for the next 10 days. Luckily my symptoms were pretty mild.

"I was tested again on Monday this week and my results were negative. I feel in great shape and I can't wait to be back with the team and to race in Portugal."

To date, only two drivers have tested positive for the virus, both of them at Racing Point.