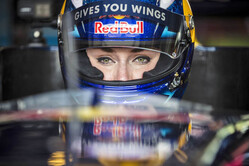 In an interview which some might consider could set women's hopes of racing in the 'pinnacle of motorsport' back twenty years, World Cup alpine ski racer, Lindsey Vonn claims she was offered an F1 drive with Red Bull, but that she was unwilling to commit to not getting pregnant.

The American won four World Cup overall championships with the US Ski Team - one of only two female skiers to do so - and a gold medal in downhill at the 2010 Winter Olympics - the first for an American woman - and a whole host of others in a career that spanned over two decades and was eventually brought to an end by injury.

In an episode of In Depth with Graham Bensinger, as well as shedding light on her various injuries, Vonn claims that she was forced to reject the offer of an F1 seat at Red Bull.

Interviewed while driving Bensinger, when asked if she has ever driven a racing car, Vonn reveals: "Yeh in Spielberg, in Austria, on a Formula One track.

"I loved it," she says of driving a Formula Renault 3.5 on the track in 2016 (pictured), "but I had a tendency to go a little too fast in the corners.

"I thought, 'mmm, I shouldn't mess this car up, because it's several million dollars," she laughs.

"I almost... I was thinking about switching... to go into Formula One," she reveals.

"What do you mean?" asks Bensinger.

"Actually try to be a racer... a driver," she replies. "I couldn't," she continues, "because they wanted me to commit to three years, and like, you can't get pregnant, you can't do anything. I thought, 'mmm I don't know if I really want to do that'," she tells Bensinger who appears incredulous that she was told she couldn't get pregnant.

"They said, you have to fully commit," she says, "and I said why do I have to fully commit, and I'm like, 'okay, I guess I'm not doing that," she laughs. "But that was definitely going to be, something that would be very exciting for me, personally. I would love to do that.

"What team would it have been with?" asks Bensinger.

"With Red Bull," she replies. "And they're like, 'if you don't make it in Formula One you can always do NASCAR'.

During the drive, Vonn's fiancé, New Jersey Devils defenceman P. K. Subban calls, and when asked about her ambition to race in F1, replies, "she obviously would practice her driving more, but one hundred percent she could do F1 racing, she's crazy, she's nuts, she would do it, she wouldn't be scared at all."