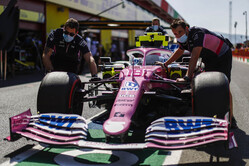 From the moment the RP20 appeared at pre-season testing, its striking similarity to the 2019 Mercedes earned it the nickname 'Pink Mercedes' and later '(t)Racing Point'.

Once the car hit the track it was clear that to some extent performance also mirrored the world championship winning best from Brackley.

When the season finally got underway and it became clear how good the RP11 actually was, and what had begun as paddock murmuring soon developed into an official protest.

The resulting row saw the Silverstone-based outfit's cars protested at a number of events before the team was hauled before the stewards.

Controversially, the FIA's investigation centred on the RP20's rear brake ducts which were deemed to have broken the sporting regulations as the design was based on CAD drawings supplied by Mercedes.

While the team was fined 400,000 euros and deducted 15 championship points it was controversially allowed to continue using the brake ducts.

A number of teams threatened to protest the decision - including Racing Point - but eventually the two main complainants, Renault and Ferrari, withdrew their appeals on the understanding that the FIA would clarify the rules on what was now termed "reverse engineering".

"We are fully convinced that what Racing Point did this season is not right," said Mattia Binotto. "We believe that it is against the principle of our sport, and we believe that it cannot happen in the future.

"In that respect we are asking and seeking clarity from the FIA," he continued. "If, let me say, regulations will be put in place, or a technical directive for the future in 2021 where we are pretty sure it will not be possible to copy, we are ready to withdraw our appeal.

"Looking at competitors, trying to understand what they do, trying to study their car, has been part of F1 history," he added, referring to Mercedes 'involvement' in the saga. "I do not see anything bad in that. But to copy an entire design, that's a different experience, because that's IP.

"If I would have been Mercedes, I would have protested someone copying myself," he admitted. "Taking pictures has always been done, I do not see anything wrong in the fact itself."