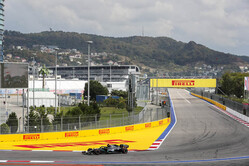 With Pirelli bringing a softer range of tyres to Russia than last year, the teams will have to manage the soft tyre in particular carefully this weekend. Although the soft has held up well, there's potentially a big advantage in starting on the medium compound as it provides more flexibility: as the frontrunners demonstrated in qualifying.

While a one-stopper is set to be chosen by most drivers tomorrow, there is a wide variety of strategic permutations using all three compounds.

Only the Red Bull of Max Verstappen and Mercedes of Valtteri Bottas will start on the medium compound in the top 10 of the grid, from second and third. The cars immediately behind them - as well as Hamilton on pole - will be on the faster soft tyre.

Second place on the grid is reckoned to be a cleaner line, which could help Verstappen get in front of Hamilton tomorrow and claim a subsequent advantage on his different strategy.

The Q2 session was disrupted with just over two minutes to go, interrupting a number of crucial qualifying laps, including that of Hamilton. This severely compromised qualifying strategy and also meant that managing tyres on the out lap was particularly crucial in the short time remaining.

The fastest way to approach the 53-lap race is a one-stopper, as has traditionally been the case on the smooth asphalt of Sochi. However, tomorrow's weather is expected to be even hotter than today, which will obviously have an effect on thermal degradation.

As usual the teams will end up focussing on a one-stopper, also because the pit lane speed limit in Sochi is only 60kph: meaning that there's a bigger time penalty for a pit stop. On top of that, it's hard to overtake if you find traffic.

The quickest way will be to start on the Red soft tyre and then switch to the White hard after approximately 12 laps. Just as quick but very marginal on wear is soft for 14 laps and Yellow medium for 39 laps. As usual, this can be done the other way round too.

Slightly slower than those is a medium-hard one-stopper: medium for 22 laps and hard for 31 laps. Finally, the quickest two-stopper will involve two stints on the soft of 12 laps and one on the medium, possibly running the medium in the 29-lap middle stint.

Mario Isola: "As expected the tyres performed well during qualifying, but the session itself was certainly unpredictable! We expected the frontrunners to use the medium during Q2 and that proved to be the case, with the Red Bull of Max Verstappen and Mercedes of Valtteri Bottas starting the race tomorrow on this compound. This should give them the advantage of a potentially longer first stint and more flexibility in terms of strategy. The red flag at the end of the Q2 session posed an additional challenge for the teams in qualifying, with a big few surprises - especially for Lewis Hamilton, who had probably intended to go through Q2 on the medium tyre - and plenty of finely-calculated tactics. The scene is now set for a tense strategic battle tomorrow, which will require a bit of tyre management for those starting on the soft tyre and intending to stop just once in particular."