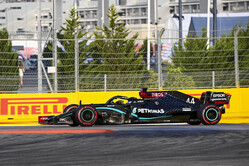 Having looked a little bit scruffy yesterday - or possibly offering his teammate a bone - Lewis Hamilton was back atop the timesheets earlier as order was restored.

Ignoring the fact that said teammate was second quickest, it is what was happening behind that was of real interest.

Having struggled on Friday, Red Bull was looking in much better shape this morning, particularly Max Verstappen, and but for traffic in the middle sector of his final run would surely have finished higher.

There were problems also for Daniel Ricciardo, who, based on yesterday's evidence should be a good bet for a decent qualifying and again on Sunday.

Saying Sergio Perez and Carlos Sainz were both quicker than their respective teammates wouldn't normally raise an eyebrow, but when you consider that both drivers are running 'old' parts while said teammate have exclusive use of the latest updates...

With AlphaTauri also in the mix, and Sebastian Vettel outpacing his teammate, we really do appear to have an interesting session ahead of us.

Throw in the likes of Russell, Grosjean, the penalties for exceeding track limits and the uncertainty over tyre strategy - particularly in Q2 - and things get interesting.

Ahead of Q1, the air temperature is 26 degrees C, while the track temperature is 35 degrees. As was the case this morning, there is a 10% chance of rain. Indeed, there are some worrying clouds in the distance. Oh what fun.

The lights have barely gone green before Russell is on track, the Williams driver on mediums.

Shortly after, the Williams driver is joined by the Black Arrows and whole load of others, however, unlike Russell they are on softs.

Russell aborts his lap following a mistake, and as a result Bottas will be the first driver to post a time. He crosses the line at 32.656, with Hamilton posting 34.265 moments later. However, having run wide in Turn 2 the Briton's time is deleted.

Kvyat goes second (34.817), ahead of Raikkonen and Giovinazzi, as a number of drivers have their times deleted.

Russell had previously claimed that conditions had changed due to the wind, which could be the cause of drivers running wide at Turn 2.

Perez goes second (33.704) and Sainz third, ahead of Leclerc, Stroll and Verstappen.

Like Russell, the Renault pair head out on mediums.

The world champion stops the clock at 32.983, courtesy of a two from Norris, to go second.

Frantic calling on Bottas not to touch his car.... not because of KERS but rather the fact that it is on the scales.

After the first wave, it's: Bottas, Hamilton, Perez, Sainz, Verstappen, Leclerc, Ricciardo, Gasly, Albon and Stroll. Ocon, Raikkonen, Giovinazzi, Grosjean and Latifi comprise the drop zone, the Canadian having had his time deleted.

With 3:50 remaining the drivers head out again, including Bottas.

As has become the norm, having headed out together, the field is bunched up together. This is going to be frantic.

A spin for Raikkonen in Turn 2.

Despite missing the cut, Grosjean is pleased with how his car handled. "Good job guys," he says.

Unusually, or perhaps not judging by those clouds, as soon ass the lights go green there are a number of drivers on track, including both Mercedes.

The Black Arrows are both on mediums, as is Verstappen. The rest are on softs.

Ocon is already being warned that there will be "some kind of traffic jam at the end of the lap".

"Some drops of rain," reports Perez.

Sainz splits the Mercedes pair with a 32.757 as Hamilton has his time deleted, which accounts for that huge difference in times.

Perez goes second (to Sainz), only to be demoted when Ricciardo posts 32.218.

"Leave this tyre on and go again," says Hamilton as he pits. "Negative," he is told, "we're going to keep the medium, we've got another set to go." The Briton, with his time deleted, has yet to post a time.

Russell is first out for the final assault, the Williams driver enjoying a clear track.

The Mercedes pair stick with the mediums, while Verstappen switches to softs.

Hamilton goes quickest in S2, but at that point the session is red-flagged as Vettel crashes.

The Ferrari is badly damaged, and Vettel is clearly shaken. Though he reports that he is OK, he looks a little dazed and shakes his head. Climbing out of his car he picks up the debris and places it on his stricken Ferrari.

The German appeared to lose the car s he exited Turn 4, bounced over the kerb and hit the barriers. He was lucky not to collect teammate Leclerc who was running right behind.

The session has 2:15 remaining, and while Hamilton is told there is enough time for an out lap, he will have to go like the clappers in order to get a flying lap in.

In the danger zone are Albon, Stroll, Russell, Vettel and... Hamilton.

Andreas Seidl admits that the return to the track should be "interesting". Indeed, even with no news of when the session will restart, the Bulls are at the end of the pitlane, along with a number of other drivers.

Among the last out is Hamilton, who is now sporting softs.

The session will restart in another two minutes... during which time those tyres will be cooling... before being pushed to the limit in order to make it to the line in time to get a flying lap in.

Stroll appears to have a problem. He is removed from the queue and pushed back into his garage.

The session resumes and Verstappen wastes no time in passing his Red Bull teammate.

On his out lap Hamilton runs wide, which further compromises his chances.

While the Red Bulls pull away, Gasly, who created a gap to the pair, has backed up the rest of the field.

Hamilton makes it to the line by the skin of his teeth.

Due to the cool tyres there are few PBs and no purples.

Hamilton goes fourth with a 32.835, while Gasly leapfrogs Albon and Ocon claims tenth.

So, Ricciardo is quickest, ahead of Bottas, Sainz, Hamilton, Perez, Norris, Gasly, Albon, Verstappen and Ocon.