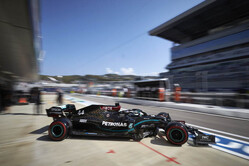 Ahead of today's sole practice session, the air temperature is 26.6 degrees C, while the track temperature is 38.3 degrees. There is a 10% chance of rain.

Valtteri Bottas headed the timesheets in both seconds yesterday, and though teammate, Lewis Hamilton was right behind in FP2, it was a scrappy day for the world champion.

However, it wasn't as scrappy as that endured by the Red Bull pair, the RB11 clearly struggling here.

Indeed, the Austrian team looks likely to be under pressure from McLaren, Renault, Racing Point and even Ferrari this weekend.

Other than the crashes involving Carlos Sainz and Nicholas Latifi, we saw a number of drivers caught out by the bumps, wind, the 'greenness' of the track surface and the various other factors that tend to sort the men from the boys.

Sensibly, overnight the FIA has warned that the track limit rules at Turn 2 now apply also to the final corner (Turn 18).

The lights go green, but as ever there is no immediate rush to work.

Almost five minutes in, Norris heads out, followed by his McLaren teammate. Both are on the mediums. The Briton is still running the new nose and front wing, while the Spaniard has the old versions.

Grosjean, Magnussen, Bottas and Ricciardo head out, the first three on softs and the Australian on mediums.

A mistake by Bottas in Turn 7 sees the Finn abort the lap.

Hamilton and the Alfas – another great band name – head out.

Grosjean reports "massive understeer in Turn 2," but believes it's going to get better.

Raikkonen goes third with a 35.713, The Iceman clearly still loving his job.

Just over twenty minutes in and all but the Red Bull pair have made an appearance.

"I'm sorry mate, just a bit fed-up," complains a clearly frustrated Grosjean, along with a few expletives. On the pit-wall team boss, Guenther Steiner looks suitably unimpressed. It would appear that Formula E or WEC looms.

Gasly spins at Turn 15 after losing the car on the bump midway through the corner.

At which point Verstappen heads out, on softs.

The highest placed medium runner is Ocon in fourth, with fellow medium runners Leclerc and Perez sixth and seventh.

After running wide in Turn 2, Russell has his time deleted.

On his second flying lap, Verstappen goes quicker in the first two sectors but by S3 he is clearly struggling.

A typically 'robust' dialogue between Kimi and his engineer over a warning light that may or may not mean anything.

Stroll is understandably unhappy when a team member nonchalantly crosses in front of his car as he is about to head out.

Bottas is back on track on a fresh set of softs. He immediately goes quickest in the first two sectors, finally crossing the line at 34.055, extending the gap to his teammate to 0.444s.

Hamilton heads out on fresh softs, as do the Ferrari pair.

Going quickest in S2, Hamilton maintains the pace in the final sector, crossing the line at 33.279, almost 0.8s quicker than his teammate.

It wasn't the best of laps, so clearly the world champion has something in hand.

"Which engine modes do we still have," asks Bottas, who subsequently complains of being blocked as drivers continue to drive "unnecessarily" slowly.

Perez goes fourth with a 34.252, with the old aero package, while Sainz is quicker than Norris, the Spaniard using an older nose and front wing than his teammate.

Verstappen goes quickest in S1, but loses a whole load of time in S2. Albon improves to seventh with a 34.603. That said, his time is subsequently deleted.

Posting PBs in the first two sectors, Ricciardo is clearly distracted by a loose (left) mirror, which he adjusts while driving at 180 mph. Nonetheless, he improves to tenth (34.787).