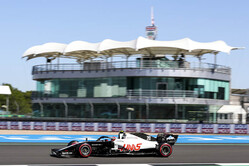 The fifth round of the 2020 FIA Formula One World Championship began with practice Friday at Silverstone Circuit as teams prepared for Sunday's F1 70th Anniversary Grand Prix.

Both Haas F1 Team drivers ran exclusively on the Pirelli P Zero Red soft tire throughout FP1 with two sets each allotted to Grosjean and Magnussen. Grosjean set the 13th fastest time of the morning with a 1:27.908 lap - set on his second set of rubber. The Frenchman followed that up with some sustained running on the softs totaling 26 laps by the checkered. Magnussen's second tire set was rendered virtually unusable courtesy of a flat-spot on his front-left tire. The Dane's quickest lap, a 1:29.319, came on his first stint early in the session placing him 20th overall.

The run-plan in FP2 comprised of a baseline outing for both VF-20's on the Yellow medium tire before a switch to the soft compound for qualifying simulation runs - where Grosjean and Magnussen set their fastest laps. Grosjean banked a 1:27.294 around the 5.891-kilometer (3.66-mile), 18-turn circuit - placing 15th on the timesheet. Magnussen similarly improved upon his fastest time of the day, clocking a 1:27.582 lap for 18th overall. High-fuel, long-distance runs followed to take both drivers to the end of the session.

Romain Grosjean: "It was a good Friday, you know, P13, P15 - those are the positions we're fighting for. The car felt absolutely mega from the morning. We worked around tricky conditions with the hot, softer tires and then the wind also picked up a little more this afternoon, which made things a bit more interesting. Generally, I've been very happy with the car though. I think we've done a good job; I think we're moving in the right direction. Hopefully we can find a little bit more for the race on Sunday. We know what we have with our package and we always push as hard as we can."

Kevin Magnussen: "We couldn't really get the car working in FP1, but it was a lot better in FP2. We're lacking a little bit of straight-line speed compared to the other car. We lost a little bit of time, but we know it's got to be there somewhere. The car was much better in the corners, handling-wise, as a positive. It's tricky this time around as we have these softer tires. It's a challenge. The higher pressures aren't making it easier, it's tough, but I guess those things are the same for everyone. It's going to be interesting to see what we do with strategy and how to manage these soft tires on the track. Last week the car handled very well so we need to get it back into the same kind of handling. It's obviously slightly different with these tires, we at least have the C2 and C3 knowledge from last week, but the C4 tire is a completely different story."

Guenther Steiner: "I would say it was a good FP1 and FP2 for us - we had no problems, no issues, we found we had a good balance. For sure, there is more work to be done, but I think we got out of the car what we could, and we learned a lot in doing it. I think we've improved the car from where we were last week with all the team continuing to work here over the week. We just need a little bit more, we're trying to squeeze everything out of it that we can at the moment. Hopefully tomorrow we can make another step and get into Q2 in qualifying - that's our aim. Everybody's working hard to achieve that."