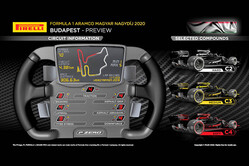 The delayed 2020 Formula 1 season continues at the Hungaroring with the third race of a triple-header: never seen before in F1, except once in 2018. The tyre selections are the same as the previous two races in Austria: C2 as the P Zero White hard, C3 as the P Zero Yellow medium, and C4 as the P Zero Red soft.

That's not the only thing remaining the same: this year the drivers will all have the same allocations: two sets of hard tyres, three sets of mediums, and eight sets of soft.

The C2, C3, and C4 compounds were also chosen in Hungary last year, as they are well-suited to the famously tight and twisty characteristics of the track, as well as to the high temperatures expected this weekend.

Like the Red Bull Ring, the Hungaroring is a short four-kilometre lap with several changes in elevation. However, it's much slower and more flowing, putting the emphasis on mechanical rather than aerodynamic grip.

With tyre wear being normally quite low, this has often been a one-stop race. However, last year's winner Lewis Hamilton made a second stop late in the race - with five different tyre strategies seen in the top five. Managing degradation was key to the race.

One of the reasons for last year's unpredictability was the mixed conditions in free practice, but normally Hungary is one of the hottest races of the year. The lack of airflow due to the nature of the track makes it particularly tough on drivers and cars.

The tyres too face a challenge at the Hungaroring, due to the non-stop sequence of 14 mainly slow corners, with only one short straight at the start-finish. This means that the tyres are constantly working: some drivers even compare it to their time in karting.

Mario Isola: "For the first time, the Hungaroring is only the third race of the year. With the same tyre nominations and allocations as the first two races - at a venue that is well-established on the F1 calendar - the drivers should have a good idea of what to expect. Last year's race broke a lap record that had stood since 2004, so it will be interesting to see if the times come down further with the 2020 cars, which of course still use our 2019 tyres. The Hungaroring is a very demanding track on both cars and drivers, where managing overheating is always essential, and so it's thrown up a few surprises in the past. It's going to be interesting to see if the disrupted start to the season has any effect on the competitive order this weekend, with some teams bringing new developments as well."