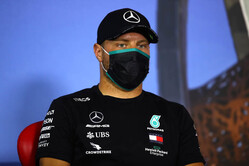 In the wake of drivers, Charles Leclerc and Valtteri Bottas, together with a number of team officials, including Zak Brown, leaving the Red Bull Ring between last week's race and this week's, and subsequently receiving a warning from F1 and the FIA, such transgressions in Hungary next week could result in a fine or even imprisonment.

"Attendees of UK or other non-EU or EEA nationality should not leave the venue or their accommodation for any reason," read a note sent to all the teams this morning, according to Motorsport.com, "other than for travel between the two locations and for their pre-arranged arrival and departure to and from Hungary.

"Attendees of UK or other non-EU or EEA nationality may not use public transport and taxis," it added.

"Failure to adhere to these additional restrictions will be punishable by the Hungarian authorities and may result in imprisonment and/or fines of up to approximately 15,000 Euros."

While the rules only apply to UK and non-EU citizens, the note adds that "in order to clearly demonstrate the willingness of all Stakeholders and Attendees to respect the measures which the Hungarian government has established for the running of the Hungarian event, and to avoid any possible confusion within the local community, it is highly recommended that all attendees adhere to the restrictions".

In the wake of the actions of Leclerc, Bottas and Brown, a number of teams expressed unease with the breaches of protocol.

"That is a concern of mine," admitted Otmar Szafnauer. "I make sure our team and we have other team members as well - we brought our health and safety officer, for example, to the first race to make sure that there are no breaches at all in our team.

"First and foremost, I try to do that with our team but secondly, I think the FIA should look further and make sure that everybody is doing it. We saw, for example, in some of the support race paddocks, they're not quite as vigilant as we are and then come into our paddock and... We all have to stay vigilant because, like you say, if there is an outbreak here and we have to miss races, that would be disastrous."

"The rule is clear," added Frederic Vasseur, "we were allowed to go back to the factory for serious reasons.

"I don't want to comment for the Charles story or Valtteri," he added, "but the rule is clear that you have to perform the test again before going back to the track. I did one, two days ago, and another one this morning.

"I think it's the safest place in the world. Everybody did tonnes of tests and I think that the rule is respected by everybody."

"There is clear rules that when you come in here, you need to be tested, so I don't know what happened with Charles and Valtteri," said Guenther Steiner, "but maybe it's a story on social media - but if they get checked in the beginning I think that's OK and it's quite clear what you have to do and what not to do here. So, we all know that and what I've seen, all the people working in F1 are very disciplined.

"I think we try our best. For sure mistakes happen - always - but nobody's trying to undermine the issue intentionally or try to be smart about it. I feel very safe here. If any of us get it here, I will be very surprised."

Meanwhile, F1 MD, Ross Brawn warned that following almost 9,000 test, all of which were negative, the sport cannot be complacent.

"Motor racing is very good at logistics, very good at organising," he said, "Plan A, Plan B, Plan C is our bread and butter, that's what we do all the time.

"With the FIA, Formula 1, promotors, with the teams, we started regular meetings to work out a plan and how we could go racing. The concept of the biosphere and the big bubble means we will get a positive at some stage but we hope then we can control it and minimise the risk.

"My wife was quite concerned about me coming here," he admitted, "and I said this should be the safest place for me to ever be, and that was the objective. Touch wood we've been ok so far but we can't get complacent.

"Everyone's keen to get racing as long as we offer a safe environment to do it," he added. "We need to ensure that Formula 1, being an international sport moving around the world, we don't become a sport that takes Covid-19 into a country. We've got to be someone who countries can totally rely on being a safe activity to have."