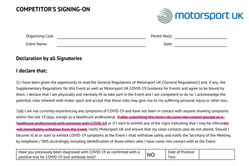 Last week, Motorsport UK confirmed that motorsport will resume in the UK from 4 July. In anticipation this the governing body for four-wheel motorsport in the UK is inviting online permit applications from 1st June.

The permit applications cover all manner of disciplines and are for competitors, media and officials.

Though they do not relate to drivers and teams competing in the forthcoming F1 races at Silverstone, they do relate to officials, such as marshals, attending the back-to-back events.

"All persons appointed to act in an official capacity at the meeting must sign below", declares the pre-event declaration for competitors, officials and media.

"I am not currently experiencing any symptoms of COVID-19 and have not been in contact with anyone showing symptoms within the last 14 days, except as a healthcare professional," reads the declaration in part, with the applicant also having to agree that "if I start to exhibit any of the signs indicating that I may be infected I will immediately withdraw from the event". It is this that is causing unease.

In other words, despite one's best efforts one genuinely doesn't know if one has been "in contact with anyone showing symptoms within the last 14 days".

"How would you know you hadn’t been in contact with someone who was showing symptoms if they didn’t tell you, are we expected to be clinicians now too and be able to spot it for ourselves?" asked one concerned official due to be on duty at the Grand Prix in August.

While it is unclear if the FIA is asking similar questions of F1 drivers and personnel, at a national level, and even F1 as far as officials are concerned, Motorsport UK appears to have got it wrong.