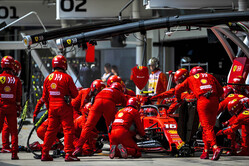 "A Closed Event will be determined at the sole discretion of the FIA and the CRH (commercial rights holder)," states Article 21.6 of the revised 2020 sporting regulations issued on Wednesday, "and will be defined as one which does not permit spectator access."

"From the start of a Closed Event until the declaration of the official classification of the race, no competitor may have more than a total of 80 team personnel within the confines of the circuit," it continues.

"No more than 60 of these team personnel who are within the confines of the circuit may be associated in any way with the operation of the cars.

"For the avoidance of doubt staff whose duties are solely connected with hospitality, team motorhomes, sponsors, marketing, public relations, security or driving trucks to or from the event are not considered operational personnel."

Previous estimates have claimed that upwards of 2,000 people might be required, what with team personnel, suppliers, officials and marshals. With the ten teams accounting for 800 of these, support events such as F2 and F3 will surely raise that figure, especially when one considers those "not considered operational personnel".