Todt: Whoever gets Vettel will be "very lucky" 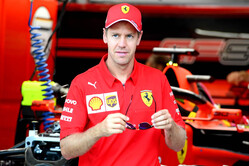 For Sebastian Vettel the Ferrari dream is over, and barring a major upset when - indeed if - the 2020 season gets underway, the German will leave Maranello at season end without claiming a single title with the team, unlike his great hero, Michael Schumacher who won five successive championships with the Scuderia.

FIA president, Jean Todt, who oversaw that last golden era at Ferrari, hints at issues within the team as the reason Vettel never came close to emulating Schumacher.

"The results, good or bad, you can explain." he told Sky Sports, when asked to compare Vettel's time at Ferrari with Schumacher's.

"Together with Michael, the whole team at Ferrari, we had so much success because we had a very united, strong team who were supportive of each other," he continued, "mainly in the difficult times rather than in the good times.

"It is easy to be together when all is good," he added. "You see a good sailor in a rough sea, so when we were in the rough sea we were all on the boat. I am talking about boats but we are talking about cars, of course."

Asked about the German's future, he said: "Sebastian is one of the greatest talents in motorsport.

"There are a lot of other opportunities," he continued. "We can only wish him the best and I mean that. Whoever will take him will be very lucky.

"Maybe he will be a good president of the FIA in the future. You never know."

With the German known to be a purist and no fan of the hybrid era engines, or the myriad of gimmicks, such as DRS, introduced in recent years, that might not be such a bad thing.