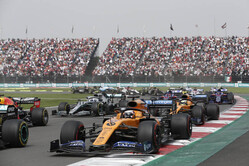 All ten teams have agreed to a $145m (£117.7m) budget cap, which, subject to ratification by the FIA's World Motor Sport Council, will be introduced next year.

Originally, the cap was to be $175m but with an eye on the financial difficulties all are to suffer as a result of the ongoing pandemic this was initially reduced to $150m.

While the smaller teams, led by McLaren, were keen to see the cap reduced to as low as $100m, Ferrari and Red Bull were adamant that it should be no lower than $145m.

Ironically, at a time there is doubt over how many races might go ahead this season, once introduced the budget cap limit will be increased by $1m for each additional race over 21 rounds, but reduced by $1m should there be less than 21 races.

The teams have also agreed on a so-called success handicap, which will see the less successful teams enjoy more time on aero development, such as windtunnel testing and computational fluid dynamics (CFD), while the more successful teams will have less time.

Though the precise nature of how this will work has yet to be agreed, the system will work on a sliding scale with the BBC claiming that, "there will be a defined benchmark amount of permitted wind-tunnel time and computing data... (and) the team who finishes first this year will be allowed 90% of that quota, with a sliding scale at 2.5% increments so the team that finished last gets 112.5%."

Accordingly, from 2022, the champion constructor would be permitted 70% of the quote, with 5% increment, meaning that the team that finishes last is allowed 115%.

While the raft of new technical regulations will not now be introduced until 2022, it was agreed that next season the teams will use this year's cars.

As part of the bid to reduce engine costs, there will be restrictions on development including the number of upgrades and the time spent on the dynamometer.

Also, it was agreed - hopefully as a temporary measure as the sport to seeks to hold as many as 18 races this season - that some events may need to be reduced to two days.

While there is a meeting of the World Motor Sport Council scheduled for mid-June, it is understood the proposals agreed on Friday will be put to an e-vote next week.