All eyes on Mercedes, Wolff and Stroll? 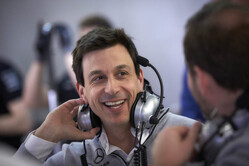 Sections of the German media are today reporting that Toto Wolff is to step down as team boss at Mercedes, though they curiously claim he will retain his 30% stake in the team.

There has been speculation over the Austrian and indeed the Brackley-based outfit for some time, a situation not helped by the lack of 'signs of life' from the team in recent months.

While there have been the much appreciated team videos and social media activity, it has been noticed that Mercedes has barely been quoted on any of the major issues in recent months.

In the build-up to the season-opener, although critical of the FIA's handling of its investigation of Ferrari, Mercedes suddenly went quiet, unlike Ferrari and Red Bull.

And while all and sundry have expressed their views on the budget cap and other regulation changes, again Mercedes has been uncharacteristically quiet, not voicing any objections though not offering its support either.

Drivers Lewis Hamilton and Valtteri Bottas are both in the final year of the current contracts, and for some time the Briton has said that he will decide his future when he knows what team boss Wolff is doing.

One (former) leading figure in the sport - and that's as much as you're going to get - has long suggested that we are on the verge of the biggest shock to hit F1, not only in 2020, but possibly in living memory.

The word is that Lawrence Stroll is to sell Racing Point to Dmitry Mazepin, father of F2 racer Nikita, while the Canadian buys Mercedes which will then be renamed Aston Martin.

In many ways it makes sense, for many feel the writing has been on the wall for Daimler for some time.

Ahead of this season, the German team looked set to make history, giving it the perfect opportunity to sign-off, but then came the global pandemic which has hit all the manufacturers hard.

Stroll would get a title-winning team, with all the right people already in place to take Aston Martin forward, while Mazepin would get his hands on Racing Point a couple of years later than he wanted.

It would guarantee the future of two teams at a time the futures of Renault and Haas are in doubt.

As we say, this comes from someone who has always had his finger on the button, and while he has a reputation for stirring things up and indulging in the odd game of 'smoke and mirrors', is not known for making claims that have no basis in fact.