Abiteboul: We only want to find out what happened 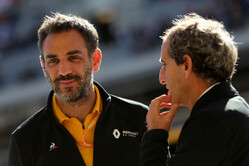 While the sport keenly anticipates the sound of engines firing up in Spielberg in around two months time, should that prove to be the case, another sound can be expected to follow shortly after.

Alongside the howls of protest from the likes of McLaren at the Mercedes-influenced Racing Point, Red Bull will lead the chorus of disapproval in terms of the FIA's investigation of Ferrari's 2019 engine and the subsequent "agreement".

"It's something of the previous world," he tells the official F1 website, "but it's still something which at some point should be addressed.

"We live in a world which is totally open," he continues. "We are not challenging the process, we only want to find out what happened.

"We want to find out what the legality concern was and also to make sure we are staying away from similar legality question marks," he added.

"Very simply, I'm an engine manufacturer myself, I want to make sure my engine doesn't pose the same legality question mark. I don't think so. But I think it only makes sense if the regulations are clear and the decisions are clear for all participants – that's what we're asking.

"We have no intent to change what has been done," he insists. "We would like to know in order to move on."

While Renault might have no intention of changing what has been done, its former partner, Red Bull, has, with the Austrian team understood to be considering legal action in terms of the points it feels it was "cheated" out of by Ferrari last year.

In terms of Racing Point's heavily Mercedes-influenced 2020 contender, Abiteboul admits that despite the grumbling in the media the matter has not been raised at the various meetings of the sport's key stakeholders. That said, there has been talk about what actually constitutes a constructor at a time a number of the bigger teams appear to have smaller rivals under their wings.

"The meetings have been focused on short term survival and medium and long term sustainability of the sport, which is exactly what needs to happen," says the Frenchman.

"It's important we side-line the most contentious topics we had over the winter, though I'm sure these topics will come back as they are directly connected to the business model of F1.

"We will be thinking and talking about Racing Point legality later," he adds. "By saying that, I'm not putting any threat, I'm just saying that we need to think about a bit more strategically in the current circumstance."