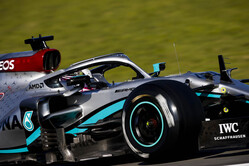 While Planet Paddock continues to discuss the merits and legality of Mercedes dual axis steering system (DAS), it would appear that the system has already been banned from us in 2021.

Indeed, the fact that such a system is referred to in the 2021 regulations issued last year confirms Mercedes claims that the FIA has known about the system's introduction this year for some time.

Article 10.5.2 of the 2021 regulations (pdf), which were issued in October last year, state that: "The re-alignment of the steered wheels, as defined by the position of the inboard attachment of the relevant suspension members that remain a fixed distance from each other, must be uniquely defined by a monotonic function of the rotational position of a single steering wheel."

Article 10.4 of the 2019 regulations, which applies to steering, however, contains no such rule.

Consequently, as James Allison previously claimed, it would appear that Mercedes had been in consultation with the FIA for some time, and though it allowed the device this year, ensured that it was banned under the 2021 regulations.

While rivals team remain sceptical about the system's merits, the fact that it is already banned for next year will mean that only the wealthier teams are likely to consider developing their own versions. Assuming they believe the system is beneficial.