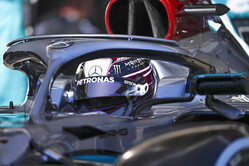 Mercedes technical director, James Allison no doubt summed up the mood of the entire team when asked if the German outfit hopes to retain Lewis Hamilton who is in the final year of his current contract.

"He's reasonably important, I would say," smiled the Briton. "He's got a few of our points over the years so we'd love him to stay.

"I'm sure if we keep making fast cars, he'll be keen to drive them," he added.

Sitting alongside Allison was the man himself, and having previously admitted that there are a number of factors that will influence his decision going forwards, including whether Toto Wolff remains with the team, the world champion, who has been linked with a switch to Ferrari, essentially revealed that it is not far off being a question of dotting the I's and crossing the T's.

"I think our goals are aligned," said Hamilton. "So in the coming months, I'm sure I will sit down."

At a time sections of the media have been reporting that the world champion is seeking an astronomical salary, Hamilton insist that it is the "fine details" that matter.

"In going more into fine detail, you're trying to figure out what the next five-to-ten-year plan is," he said. "How the decisions I make now impact the future, and does it allow me to put certain things in place so that when I do stop and hang up my helmet I'm able to continue on to other things?

"That will be in the small print really of what we talk about, but that's the one we will be talking mostly about," he admitted.

Asked about his negotiations with Wolff are going, Hamilton, who carries out his own negotiations, said: "He tries to ask for something and I combat it. It's a back and forth.

"I think it was like eight or 10 hours the last time we sat down, and we got through it great," he smiled. "Then it goes back to kind of the bad cops, which is the lawyers."