Alfa to reveal all at start of Barcelona test 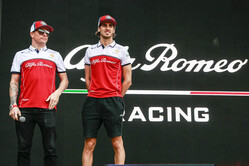 Alfa Romeo's 2020 contender, which is certain to be designated the C39, is to be unveiled at Barcelona, on the first morning of the opening pre-season test.

In a brief press release, Alfa Romeo Racing ORLEN - its new title in the wake of Robert Kubica's sponsor following the Pole from Grove to Hinwil - announced that it will present its contender for the 2020 season at 08:15 in the Barcelona pitlane, ahead of the first day of testing for the new season.

In the three, four, five-way battle that was the 2019 midfield, and with Mercedes, Ferrari and Red Bull effectively filling the first six places, there was only so much room for improvement, certainly in terms of point scoring, and scoring points in the first four races was possibly the worst thing that veteran Raikkonen could have done, for it offered hope of further improvement on the back of 2018.

There was another flurry of point scoring mid-season, followed by a fine fourth and fifth in the ever-changing conditions in Brazil, but ultimately, at season end, Alfa was eighth, like Sauber the season before, but with nine more points.

Indeed, iIn short, though Alfa retained the 8th place won in 2018, it never built on that, and in the second half of 2019 - other than the 'freak' result in Brazil - was looking to be falling off the back of the midfield group and into the clutches of Haas.