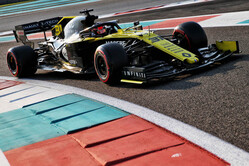 Following their initial experience of the 2020 compounds in Austin, where the tyres were made available for the two Friday practice sessions, the response from the drivers wasn't overwhelmingly positive.

"I think it was a disappointment," said Sebastian Vettel, "because there was no step forward. But it's pretty much done, the tyres are built for next year so that will be it."

"It just feels like a harder compound to be honest," added Ferrari teammate, Charles Leclerc. "I was sliding more, but to be completely honest, on my side I probably need to do a bit more mileage before to give any judgement."

"If you put the stickers on the side of them I don't see a difference," said Romain Grosjean. "We used the two prototypes in the morning, had a good check, they are not any better," added the Frenchman, "so a bit disappointing from that aspect."

Insisting that the feedback was "mixed", Pirelli's Mario Isola, while insisting that the Abu Dhabi test would be more reliable, admitted that if the negativity remained the Italian manufacturer could scrap the 2020 compounds and stick with the 2019 tyres.

"So, we need a bit more time to test them properly on long runs, to understand if we achieve this target," he added. "After that, obviously we are very happy to accept any... not accept any decision... but to discuss the result of the test and to see what is better for the sport."

Following this week's test, while insisting that the 2020 tyres are the "best solution", Pirelli said will continue with the 2019 tyres if the teams believe this to be the best option.

"We completed (the) two days of testing in temperatures that were more typical of the Formula 1 season," he said. "The most important part was giving teams the opportunity to run the 2020 tyres back-to-back with the current 2019 tyres, to see how they compared.

"Although each team's test programme was – as usual – individual, the drivers now have a good subjective impression and the next task is to correlate this with the objective data gathered.

"During the first day, we tended to see shorter runs, with teams concentrating on longer runs during day two. We've noted some improvements, especially with the softest C5 tyre, but that's not always been matched by the tyres with compounds in the middle of the range.

"To get the complete picture, we'll of course analyse all the data in precise detail over the next days, especially the long run data, which is particularly pertinent.

"Considering the predicted evolution of the cars for next season, we still believe that the 2020 tyre construction remains the best solution, but we are of course open to continue working with the 2019 tyres if this is what the majority of teams desire."