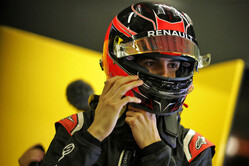 Following his epic drive to fourth in Sunday's Abu Dhabi Grand Prix, Valtteri Bottas topped the timesheets on the first day of 2020 tyre testing at the Yas Marina circuit.

Interestingly however, the Finn was one of only two drivers to post his best time on the 2019 rubber.

On his last day behind the wheel of the championship-winning W10, Bottas had a productive day, completing more than two full race distances (766.452 km).

His best time of 1:37.124 was 0.867s was quicker that Sebastian Vettel who finished second fastest, as the German team focused on long runs with the 2020 tyres, learning about the characteristics of the different compounds. The team also spent time comparing the 2019 and 2020 tyres back-to-back.

"It's been a very productive day," said the Finn, "we did more than 750 kilometres. We've been learning about the 2020 tyres and how they compare to this year's tyres.

"We gathered a lot of data for the team to analyse over the coming weeks. I still have a few more team commitments before I eventually leave for the holidays and I'll head off for the break with a positive mind-set after a strong season and a good last day of testing with this year's car."

"It's been a busy day, we completed 760km," added Andrew Shovlin, "the car has run well and Valtteri has given us some good feedback on the new tyres.

"There's a lot of data to go through to understand the differences between the new and old tyres and we'll have to get through that before drawing any conclusions. It's quite difficult testing during the daytime as the track temperature is changing almost every run, which you need to factor into your analysis.

"We've got George (Russell) in the car tomorrow for the final day and another busy programme planned."

Vettel was back on duty for Ferrari, the German, like Bottas, completing two race distances.

In the first 60 minutes, the teams were allowed to fit aero measurement devices to the cars. In this configuration, Vettel did four runs with rakes and other data collection sensors.

After 10:00, the Pirelli test programme began with teams running a comparison between the 2019 and 2020 tyres, for the first time since they initially tried next year's rubber during free practice for the United States Grand Prix.

Back then, testing had been inconclusive because of the very cold weather and the fact that the Circuit of the Americas track is very bumpy. Shortly after noon, the team spotted an anomaly on the SF90s exhaust system and brought Vettel in early to check out the problem.

The German was back on track before 13.30 and got through the rest of the programme without a hitch. He tried all the compounds available, both 2019 and 2020, doing several long runs.

His best time of 1:37.891 was set at the start of the afternoon on the C5 compound and ended up being the second best of the day.

Charles Leclerc is at the wheel of the SF90 tomorrow.

"It was a useful day to get a proper idea of the 2020 tyres in comparison with this year's," said Vettel. "So today, a comparison was our main task and we tried to maximize the track time, completing well over 100 laps.

"Tomorrow there's another day to evaluate the tyres with Charles and it will be important to record his feedback."

At Haas, Romain Grosjean accumulated 146 laps as he worked through a programme of comparison runs between the various compounds. His fastest time, a 1:39.526, was set on the 2020 C5 rubber, placing him 5th overall on the timesheet.

Test driver Pietro Fittipaldi takes over the VF-19 on Wednesday.

"We've had a good test checking the 2019 tires versus the 2020 ones," said the Frenchman. "We were seeing what we can prepare for next year, and which ones are better to run.

"I think it was a very positive day," he added. "The preparation was excellent, and the team have done a good job - I'm very happy with that.

"We made a few minor tweaks to the car to see what we can learn for the future - some things were positive. I'm looking forward to meeting our 2020 challenger."

"It's a Pirelli test so obviously we've been trying out lots of tyres today," said Lando Norris, who ended the day sixth quickest, with 125 laps under his belt, "2019 and 2020 compounds, and conducting back-to-back comparisons. Short performance runs but also long runs without changing anything on the car so that tyres can be compared.

"But it was also a good day for me to explore different driving styles and techniques. Overall, it's been a productive day with good mileage achieved and with both the team and I learning a lot. Carlos takes over tomorrow so another opportunity for data gathering for next year."

"It's been a very productive day," added Andrea Stella. "We've run without any problems or delays and we were able to get through our programme, which was very busy. We're happy that we could conclude it with all the test items having been done.

"We had test items related to measurements with rakes in the first hour, as allowed by the regulations, and then we started to go through the programme associated with understanding candidate tyres for 2020, comparing them with 2019. I think we have very valuable information, and we hope to have another good day tomorrow and finish this season positively."

While the majority of the times were posted on the C4 and C5 softs, Max Verstappen posted his best time on the 2020 mediums, Red Bull having made much use of the yellow-banded rubber in pre-season testing.

Toro Rosso had two drivers on duty, Daniil Kvyat in the morning and Sean Gelael in the afternoon. Between them the pair completed 139 laps on the way to posting the third and eleventh best times.

One of the true stars of Sunday's race, Sergio Perez, was back on duty for Racing Point, the Mexican completing 120 laps.

Williams, like Toro Rosso, had two drivers on duty, George Russell in the morning and Roy Nissany in the afternoon.

"We took the opportunity to complete a series of comparison runs on several of the proposed 2020 compounds, using the 2019 tyres as the baseline," said Dave Robson, the Grove outfit's Senior Race Engineer. "We were able to evaluate the performance in both short and long runs as we worked to maximise the potential of the new tyres.

"George enjoyed a clean morning with no track disruptions and was able to get a good understanding of how the 2020 tyres will perform at higher track temperatures.

"Once George had completed his tyre programme, we prepared the car for Roy who made his debut in the FW42 this afternoon. The main objectives with Roy were to get him comfortable in the car and to give him his first experience of the FW42 whilst gathering his thoughts on the 2020 tyres. We completed all these objectives without issue and Roy did an excellent job on his first day with the team.

"Roy will continue in the car tomorrow morning and will complete the aero rake running that is permitted during the first hour of each day. After that he will complete some clean car running before handing the car over to Nicholas, who will spend the rest of the day completing our tyre testing programme and generally preparing himself for his debut Formula One race in Melbourne in little over 3 months' time."

"It was a productive day in the car," said Russell. "We ran five sets of 2020 tyres and gathered some useful information, which will benefit us next season. I am looking forward to Australia and going racing again.

Roy Nissany: Firstly, I feel great. You know that feeling that you like your job and you know what you are doing. It took me four laps to get comfortable in the car, and from there on it was just building up my pace and confidence. We were improving and making our best laps until the end, and we made a few changes according to my wishes. I now feel confident in the car, with a lot of potential in our pocket so that tomorrow morning will be exactly what we need for the last improvements in 2019.

Check out our Tuesday gallery from the Yas Marina, here.