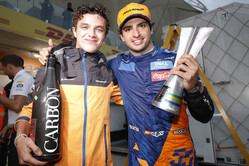 Having already waited before it was officially confirmed that Lewis Hamilton had been handed a time penalty for his clash with Alex Albon, thereby promoting Carlos Sainz to third, fans, teams and drivers alike were kept waiting almost three more hours as stewards investigated eight further misdemeanours.

Eight drivers were suspected of using DRS under the double waved yellows that followed Valtteri Bottas' retirement, as marshals pushed the Finn's Mercedes to safety.

Among the eight was Carlos Sainz, who, if handed a penalty faced losing his third position, thereby promoting Kimi Raikkonen, though it is unclear if the Finn was among the offending octet.

However, it was subsequently revealed that while the Spaniard had indeed opened his DRS flap, it was only momentary, race director, Michael Masi describing it as an automatic reaction.

"We looked at it," said the Australian, "and the overriding factor was double yellow flags is the requirement to slow, and significantly slow, and that's what we looked at with all of them.

"All of them complied with that," he continued. "Yes, a few of them did activate DRS for a relatively short period of time. I'll call it muscle memory.

"There isn't the ability of isolating single DRS zones to turn them off," he added. "It's either, they all get turned off, or...

"We had the stewards look at that and decide no investigation was necessary. The overriding factor of slowing for the double yellows was absolutely complied with."

It was only at this point, almost four hours after the race, that the result became official and Sainz could finally celebrate his first podium in F1.

"It's been a stressful last few hours," he told Sky Sports. "For your first podium you are nervous, you don't know how to act, how to react, especially without knowing the result. To get it coming from last is very, very special.

"I cannot thank enough the team and everyone involved in this," he grinned, "because so far this year has been a dream come true and last but not least we got the podium."