Binotto: We didn't change nothing 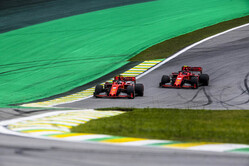 Ahead of the United States Grand Prix and again this weekend in Brazil, the FIA has sent out technical directives to all the teams in relation to the engine rules.

The directives follow an enquiry by Red Bull in terms of what is and isn't allowed, and in the wake of Ferrari's lack of pace in Austin led to claims that the Maranello outfit had been 'found out'.

Indeed, speaking after the race Max Verstappen claimed the Italian team had been caught cheating.

Vehemently denying the accusations in Austin, speaking at the end of qualifying at Interlagos, team boss Mattia Binotto insists that no changes have been made to the engine in the wake of the technical directives.

"No, no, we didn't change nothing," he told Sky Sports. "What we did is to read carefully the TDs because you need to meet up with whatever is a new technical directive. It's important to understand it.

"But we didn't change our operations, our way of using the engines," he added, "and that is since the start of the season."

Pointing to Ferrari's impressive step forward since the summer break, the Italian says it is not purely engine-related.

"We've still got an advantage on the straights," he said. "I think we know since the start of the season that we are lacking downforce and maybe our car is somehow more fast on the straights.

"Since the very start of F1, if you drop your downforce, you get some more speed but you reduce your speed in the cornering," he continued, "and our car is not as good as the others in cornering.

"That's why on circuits where we need the maximum downforce, like Hungary or the last one, or even in Mexico, we were lacking certainly speed in cornering. But we've got an advantage on the straight simply because we are running, let me say, a low downforce configuration.

"In Austin, relative to the others, we are slightly higher on downforce compared to what is a normal difference you've got. So we had less advantage of straights, still some advantage, but then we are gaining more in the corner."