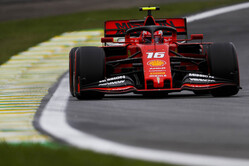 For Scuderia Ferrari Mission Winnow and the other nine teams, this was something of a half day Friday at the Brazilian Grand Prix. That was down to the torrential rain that hit the track shortly before the start of the first free practice session. However, the track was dry in the afternoon and Sebastian Vettel and Charles Leclerc ended up first and second fastest, although we can expect to see everyone's times tumble tomorrow as the track rubbers in.

When the light turned green at the end of pit lane at 11am, there were only a few drops of rain, but the track was very wet with actual puddles at some corners. Charles and Sebastian were first out on track, making the most of the conditions to try out both the full wet and intermediate tyres, starting on the former and then switching to the latter. The times however meant little. The track began to dry towards the end and both Ferrari men went out on slicks, opting for the Softs to set their best times of 1:17.041 and 1:17.285 respectively. However, they only completed 13 laps each.

The afternoon allowed for more meaningful work on both the Medium and Soft tyres, with the drivers working on fine tuning the set-up for qualifying and the race. Charles was first to post a time in 1:10.297 followed almost immediately by a 1:10.157 from Sebastian. Leclerc then got down to a 1:09.829, bettered by Vettel who did a 1:09.570. The qualifying simulation then saw them take to the track on the Softs and Vettel was again fastest by 21 thousandths with a 1:09.217 compared to Leclerc's 1:09.238.

For the final 35 minutes the work switched to race preparation with two long runs using different compounds: Leclerc used Mediums, Vettel Softs. The German did a total of 30 laps, the Monegasque 35.

Sebastian Vettel: "The car was decent, but it was not an easy day on track with the weather conditions, as we did not get so much consistent running. I think we understood what the car needs, and now we'll take it from there and hopefully we can improve it. I believe we can and we must.

"My pace was better on a single lap than on a longer run. We need more grip which is not so easy to find. But we can balance the car a bit more, which should make the long run better.

"I am pretty confident we can make a step forward, but for the race it could be quite difficult, in line with what we saw at the last two races. Now, we must focus on our own work and make sure we are in better shape for the rest of the weekend and then we'll see what it brings tomorrow and on Sunday."

Charles Leclerc: "Overall, it was a positive day for us. Our qualifying pace looks good, while we do have some work ahead of us to improve our race pace. I am glad that I had the chance to get some more practice driving in wet conditions today and pushed to go out on track as soon as possible in FP1.

"Although these conditions were not really representative, as it should be quite a bit warmer tomorrow and on Sunday, it was good to see that our pace was there. I think there is some room for improvement and we will work on that tonight.

"We will head into qualifying knowing that I will be taking a grid penalty, but this changes nothing for me in terms of my approach. I will still push to the maximum and aim to secure the best starting position possible."