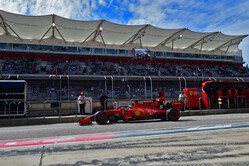 12 thousandths of a second. That was the infinitesimal gap that separated Sebastian Vettel from Valtteri Bottas' pole time in qualifying for the United States Grand Prix. The German will thus start from second on the grid, when the race gets underway tomorrow at 13.10 local (20.10 CET). Lining up right behind him will be his team-mate Charles Leclerc, who had to settle for fourth place in what was the most closely contested qualifying session of the season with the top four drivers - Bottas, Seb, Verstappen and Charles - all within 108 thousandths.

The Scuderia Ferrari Mission Winnow mechanics' contribution to the fight for pole actually began halfway through the third free practice session. That's when Charles' SF90 was back in the garage after he'd had to park it at the side of the track on his installation lap, shortly after the start of the session, with an engine problem. The guys did an incredible job to change the Power Unit on the number 16 car in just over two hours. There is no penalty for Leclerc as the PU fitted had already been used this season.

Charles was first out on track to ensure everything was in working order and to assess the wind direction at the Circuit of the Americas, as it was gusting hard in some sections of the track. The Monegasque began with a 1:34.696, quickly getting down to a 1'33"988. Sebastian got through to Q2 with one run in 1:33.766.

In the second part of qualifying, which also decides which tyre compound is used for the start of the race, the two SF90s used Mediums to set almost identical times of 1:33.198 for Seb and 1:33.188 for Charles. They did one more run on the same compound to cover off any possible improvement from those running the Softs. Again the two men set similar times, Vettel posting a 1:32.782 and Charles a 1:32.760.

Both men each had two sets of Soft tyres for the final part of the session. On the first run the German did a 1:32.041, just 12 thousandths off Bottas, while the Monegasque managed a 1:32.227. On the second set, Vettel was unable to go quicker than his previous run, as was also the case for Bottas, but Charles improved to 1:32.137, which was not quite enough to take third spot on the grid, only 41 thousandths behind Max Verstappen.

Sebastian Vettel: "Tomorrow on the grid, I'll be eight metres behind Valtteri, which will seem strange as the gap today in qualifying was definitely smaller! 12 thousandths is really very little and so I can definitely say I was a little bit unlucky.

"I have to admit that, on my first run, there was maybe some room to be faster, as my aim was to set a good time and then improve on my second set of tyres. Unfortunately, I was a bit too aggressive and maybe the track had got a bit slower and that's where the time that might have put me on pole, escaped me.

"It's not bad being on the front row here, as was proved by Kimi's start last year. It will be important to get everything right at the start and not make any mistakes when it comes to our tyre strategy. We saw last Sunday that sometimes taking a risk can pay off, so we will study the situation very carefully before the start. Friday's race pace wasn't that strong, but I think all aspects of the car have improved today, so we will just have to see where we are in the race."

Charles Leclerc: "I lost some track time this weekend, having missed half of FP1 and the whole of FP3 today, so qualifying was not so easy. It's not ideal, but it's part of racing.

"After Q2, I was a bit more confident in the car, but in Q3, our competitors were just too quick. I do always expect more, but I think we can be satisfied with P4 today if we take all the various factors into consideration.

"My focus has now shifted to the race. The start is always tricky here and I hope that it will present us with some opportunities. The track is quite bumpy, but I like that because it makes things interesting. The way in which you deal with the bumps affects the car balance, so it is something you can influence as a driver. Our race pace was not the best yesterday, so we have worked on the car and I am optimist that the changes we have made will pay off."

Mattia Binotto Team Principal: "It was really tight today, which I think is good for the fight, it's good for the sport, but as Ferrari we are a little bit disappointed, because Seb was so close to the pole time.

"It was a shame that Charles was unable to take part in the morning session because of the engine problem. The lack of running meant he had no time to get a good understanding of the car following the set-up changes we had made to it overnight. I am sure he would have done a much better job with more track time.

"It's going to be a long race tomorrow and we will need a good start and a good strategy to do well. We hope there will be some exciting battles to provide a great show to the fans. It will be important for the drivers to get into a rhythm, while tyre degradation will be a key factor. I believe we have improved from yesterday and I am sure our drivers are in a position to challenge their rivals. It's true that we have started from the front a few times without winning, so let's see if this time we can turn things around."