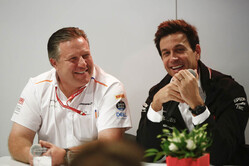 Appointed to the role with the media (and pretty much everything else) giant, led by Miami-based Russian, Mike Zoi, in early 2016, there were questions from some part of the media as to whether there was a conflict of interest, Brown appearing to sit on both sides of the fence, so to speak.

Brown announced his decision to resign on social media, tweeting: "After careful consideration I have made the decision to resign from the role of non-executive chairman of Motorsport Network. I have had the privilege of watching some of the best people in the business doing what they do so well - bringing this great sport to the fans.

"I have every confidence their passion and professionalism will continue to inform, educate and entertain motorsport lovers everywhere in the future. I wish all the staff and the company every success."

His decision comes at controversial time for Motorsport Network, which in just a few short years has branched out into various areas of the sport including clothing, art, models, streaming, memorabilia and is even the official supplier of the FIA's motor sport results and statistics database, as well as a shareholding in Formula E.

Employing the services of image search and copyright enforcement agency ImageRights to demand £3,650.00 from Pitpass - for pictures which were legally downloaded from teams' media sites, including McLaren, Motorsport Network is currently embroiled in controversy over its ownership of a number of iconic motorsport publications.

While F1 Racing has been sold, as the company looks set to shut down the print versions of Autosport and Motoring News, fans arriving at news tands to purchase this week's copy of Autosport, the so-called bible of motorsport, will discover the price of the magazine has risen to £10.99, a move that has stunned fans and journalists alike.

"I'd like to thank Zak Brown for all that he has done in his role as Non-Executive Chairman since January 2016," he tweeted. "He shares our passion for the sport.

"Without him, we would not have been able to grow Motorsport Network to the level we’ve reached today. I look forward to continuing our personal friendship and professional collaboration in the future."

In a statement relating to F1 Racing and Autosport, Motorsport Network revealed: "We have signed an agreement to sell F1 Racing Magazine to Lifestyle Media, which will post-closing continue primarily as a print-only publication. The deal, completion of which is conditional upon legal requirements, including obtaining a third-party consent, is expected to complete around the end of October 2019.

"The demands of modern consumption mean that we need to adapt our distribution methods in order to deliver our products effectively. As a result, the sale price for the print version of Autosport magazine will increase to £10.99 per issue as of this week. We are exploring options regarding our other print only title Motorsport News and will communicate any updates in due course."

"Our digital-first path has always been in front of us," said Efremov. "Over the last few months, the tremendous growth and success we are seeing in digital, combined with print challenges that have been broadly acknowledged by other media companies, convinced me that it is the right time for us to take this important step forward.

"Print is our heritage, but digital is our future and, I am happy to say, our future is bright. I would like to thank every one of our colleagues who have delivered the amazing success story we are seeing across all our digital platforms. I am excited to lead this team forward on our journey."