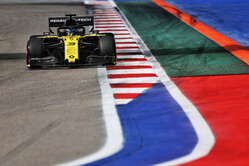 Renault F1 Team reached Q3 with both cars for the fourth race in a row as Nico Hulkenberg qualified seventh and Daniel Ricciardo tenth at the Sochi Autodrom for tomorrow's VTB Russian Grand Prix.

Nico took just one run to progress through Q1, which meant he would carry two new sets of Soft tyres for Q3. He made it into the top ten shootout after clearing Q2 in tenth place. Two solid laps in Q3 saw the German take seventh, but he will start sixth with the application of grid penalties.

Daniel required two runs to make it through Q1 and was at a slight disadvantage for Q3 with only one run on new tyres available, where he duly put in the tenth quickest time.

Since returning from the summer break in August, both drivers have made the final part of qualifying at each Grand Prix.

Nico Hulkenberg: "I'm pleased with that today; my laps were clean and tidy, we progressed through the sessions well and deservedly qualified well inside the top ten. I've felt comfortable in the car since the beginning of the weekend and I've been driving well. It would have been nice to be ahead of Carlos [Sainz]. It was tight in the midfield again, but we'll take it and fight tomorrow for some strong points. It was a decent day's work."

Daniel Ricciardo: "I've not been that fast all weekend, so to get into Q3 was pretty good. That was our target and we got there. I had to use an extra set in Q1 and that meant I only had one new tyre run at the end of Q3 and it wasn't quick enough to be higher than tenth. We'll do better tomorrow; we're in a position to take points and we'll be working hard to do that. Credit to Nico for his qualifying, he's been fast this weekend."

Alan Permane, Sporting Director: "That was an exciting qualifying session and we're happy to come away with both cars in the top ten. It's very close in the midfield with a tenth here or there making a huge difference. The key thing was Nico progressing through Q1 on one set of tyres, meaning he had two new sets for Q3, which helped. Tomorrow should be a one-stop race and we'll be aiming for it to be straightforward with both drivers scoring well."