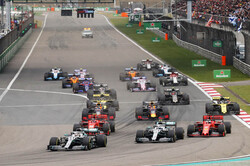 Since taking control of the sport in early 2017, the new owners have made no secret of their desire to give F1 a major shake-up, and along with plans to reduce spending and level the playing field, there is a desire to change the current race weekend, making it more appealing and relevant to the 21st century fan.

Recently, Ross Brawn admitted that a number of changes were being considered, with the intention being to give them a dry run as early as next season.

"In 2020 we’ve got a stable platform in terms of the cars," said the Briton, "things aren’t changing that much and I think that it could be a good opportunity perhaps for one or two races to try some variations.

"I don’t see any other way that we logically progress the race format," he admitted. "I think the basic race format is good, but would a sprint race be interesting, or would some changes to qualifying be interesting. I think the teams are up for doing some variations during a Saturday to see if we can try out a better solution."

"What we need to look at is that by changing the format the costs don't go up," said Guenther Steiner, when asked his thoughts on the possibility of changing the current format, such as a race to decide Sunday's grid or an F2-style sprint race, "that we do more and don't get more out of it.

"There were a lot of things around," he said of the recent meeting with F1 bosses, "but we didn't get around to discuss the detail about it. So when we get to the detail there will be the difficulty because if we change format and it costs a lot more because we do everything differently, there is a point where it is not sustainable.

Asked specifically about holding a qualifying race on Saturday, he said: "That costs more money, because you need more spare parts because you have two races a weekend, you know. You need more MGU-Ks, because they can break. So we need to consider all this stuff."

"Maybe there are some good points in there," said Franz Tost. "But the most important thing is that the teams and the cars are on an equal level on the performance side.

"You can have whatever format but if there are some cars far ahead of the others - one second or even more - then it doesn't change anything.

"What we have to provide the fans is a good show and for this the performance of the different teams and of the cars has to be on a level within a few tenths of a second, like it is in the midfield. If you look currently there are three teams far ahead, but the midfield is fighting very close to each other with a difference of a couple of hundredths of a second and there are good fights in between the cars and they show good races and this is what the fans want to see and I don't think this is so much to do with the format."

"I think we could be a bit more progressive on the weekend format," admitted Renault's, Cyril Abiteboul. "I think we need to probably adapt slightly the format to the new audience, to the way that sport is being consumed.

"Friday running in particular, with very empty grandstands, is for me a bit of a loss of an opportunity. So there is probably some improvement to be made.

"I think we need to be very careful about all detail associated with having some tests into next year, as again next year is tomorrow. The plans are made already; the engines are almost being built as we speak. So if you look at the amount of discussion we had to get to the 22 races, when we start talking about the detail of the consequence of changing the format even on a couple of races, I'm a bit afraid that we see that it is a bit difficult at this late stage of the season.

"So in my opinion we need to do that. But I think it needs to be done properly but with a global commitment, not just testing and maybe it's a bit late already for next year, but clearly doing that for 2021."