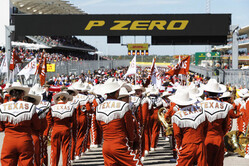 American F1 fans have to be among the most loyal on the planet, after all, the sport has treated them shabbily over the years.

While at one stage the United States played host to an east and west grand prix, for many years there was nothing. Then there were the street races, like Detroit, not forgetting those events held in parking lots.

And to cap it all there was the shameful day in 2005 where only six cars started the race as their rivals pulled out due to safety concerns.

But courtesy of the dream and determination of the likes of Tavo Hellmund, F1 found a new home in America and in some ways it has flourished, even if it needed support acts in the form of Taylor Swift and Bruno Mars to get punters through the doors.

COTA's current contract runs until 2021 - an important year for the sport - and circuit boss, Bobby Epstein is hoping to secure a new deal, though with an eye on the sport's determination to expand the sport in America, only a short one.

"I think it's right to say F1 wouldn't exist in the U.S. right now if we hadn't built a home for it here at COTA," he tells ESPN. "You just have to look at what we've done in U.S. and helping to build a fan base here. Before ticket sales had been falling and it had been difficult for any circuit to establish itself as the home of F1.

"It was not how it is today," he continued, "there were a lot of races on Mickey Mouse street circuits you can't build history on. It was the same with Indy, even if you ignore the 2005 incident, which was a pretty big black eye for F1, the circuit was still the home of the Indy 500, not F1.

Asked about a new deal, he admits: "I think a shorter deal is better for both parties, you don't want to get locked into something that you don't like down the line.

"We also can never be sure how the event or how the sport will evolve over the next few years," he adds

"What I will say is, I think there will be an F1 race at COTA for as long as the track is there, that's the benefit of building a permanent facility."

Though the sport is now American owned, F1 is still seen as being Euro-centric, and this, combined with the way U.S. fans have been treated through the years, means that the current fan-base is limited. It's growing, but it's limited.

For this reason, Epstein is dubious about plans for additional races in the U.S. particularly Miami.

"Considering the number of fervent Formula One fans in Europe exceeds 50 million and those in the U.S. is closer to 2 million, it is fair to assume Europe can easily handle many more races on the continent before one race cannibalizes another," he says. "F1 says the potential to build new fans in the U.S. is massively greater than Europe, but the negative impact of one race on another can also be huge. The U.S. casual fan base is growing, but it's the fervent ones who buy tickets more than once.

"I foresee them being at the same end of the calendar," he says of Miami. "One big risk is the structure of one promoter's contract versus another, particularly if it comes to two races in a similar market."

Asked about talks concerning a new contract, he says: "I don't think we are that far apart from what works for us as a business model and for them. We have to consider the impact of another race on our continent on our race.

"Our feeling with Miami has been that F1 should take some of the risk of that event. If you are going to do a street race you have to do it properly, somewhere which resonates with people. Like the downtown race or something on the Las Vegas strip might, or the race with the New York skyline they spoke about a long time ago.

"A race around a parking lot is not going to be something that can create itself much history, fans want to go to a marquee event. So we have to be mindful of that as F1 has those discussions because I don't think the race they are discussing now has the same impact as the one originally laid out there."

Other than the pop concerts, Epstein says that the Netflix series, 'Drive to Survive', has also helped to put bums on seats at COTA - the streaming service having confirmed that there will be a second series which will see involvement from Mercedes and Ferrari.

"The proof is in our ticket sales," says Epstein. "We are on track to have the biggest attendance of any race so far, the reserved seats already sold out in July. We are thinking of where we can build new grandstands to accommodate more fans.

"There's a lot of reasons for that," he continues, "we have the music entertainment element which has been a huge help, but the fact we have built a base here at COTA is massive. We have established a good history, made it a tradition to come and race here.

"Looking beyond that, the Netflix series has been the biggest boost for U.S. fans we have had in terms of ticket sales. All our surveys on new customers suggest it's had a huge impact and a big benefit to F1. It really was a stroke of genius to get that put on. It's why we broadened what was offered on a weekend, in order to bring different people to the event, but the Netflix series has reached people we might never have reached otherwise."