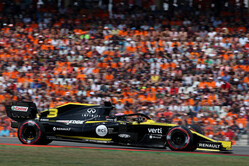 Renault F1 Team's Nico Hulkenberg will line up ninth for his home race, the German Grand Prix, tomorrow after a close and thrilling Qualifying at Hockenheim. Daniel Ricciardo missed out on Q3 by just 0.023secs and will start thirteenth on the grid.

It's the second time in as many races Nico has reached Q3 after qualifying tenth last time out at Silverstone. He will occupy the fifth row of the grid for his home outing tomorrow, where unsettled wet weather is expected.

After progressing through Q1, both drivers were well in contention to reach the final part of Qualifying in a tight Q2.

Nico made it in eighth by 0.010secs with Daniel five places down in thirteenth only 0.033secs off Nico's effort.

Nico Hulkenberg: "On a whole, we can be satisfied with that effort today. We knew it was going to be close to get into Q3 but we achieved that and that's pleasing. It was incredible how tight Q2 was with even Daniel and I only split by three hundredths and that was the difference in making the top ten or not. In Q3, I didn't quite get it together and it's only ninth in the end. We could have beaten at least two or three more cars. I'm open for anything tomorrow. Nothing is guaranteed in the wet and as we experienced last year, it is tricky in the rain here. We'll give it our best whatever happens."

Daniel Ricciardo: "It's frustrating to be the wrong side in Q2, but it was incredibly tight out there. We were the last ones in the 12.7secs and less than half a tenth would have put me eighth and through. In that regard, the midfield is enjoyable as it's so close. On my side, I have to take accountability for that as I know I could have done a little bit more. We made a good improvement from the morning so it was pleasing to be so close to the top ten. Tomorrow could be nice if it rains. Even if it's dry, we'll be alright. It's a mixed field ahead of us, but for now, we'll take it on the chin and figure it out."

Alan Permane, Sporting Director: "Firstly, credit to Nico for getting into Q3, as it was extremely close out there. There were six or seven cars in the same tenth with Nico at the top end of it and Daniel at the bottom end. Daniel had a tiny wobble at Turn 12 on his second Q2 run and that cost him his Q3 place. Nico did a great job, although, admittedly, a clean Q3 lap would have seen him qualify even higher. We know we can score tomorrow, the forecast looks unsettled and there are chances for rain during the race. We're prepared for all situations."