Chassis and engine change for Ricciardo 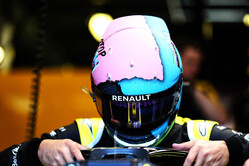 Just 24-hours after admitting that he had hoped that a cracked chassis was the root of his issues in Austria - it wasn't - Daniel Ricciardo has been forced to change chassis after a small crack was found in his tub following FP2.

Asked on Thursday about his problems in Austria, the Australian replied: "It wasn't a fun one for us really. We obviously got pretty deep into it after and tried to figure out why we were off the pace all weekend.

"Definitely feel we learned some things with set-up and I think we kind of just started in a direction which we kept pursuing from Friday, thinking it was the right way to go, but I think in hindsight it wasn't.

"It's probably more just a set-up misdirection we went for as opposed to anything crazy we found on the car. I was hoping to find a cracked chassis or something like that!" he admitted.

"I think the car does have a little bit of a sweet spot and I think we had worked towards that the last few weekends, getting those Q3s and building that confidence within myself and that momentum, but we kind of shifted a little bit away from that in Austria, for reasons that seemed to make sense at the time from a set-up point of view and all that. I think we kind of moved away from something we'd got to know but we'll try to bring it back this weekend for Silverstone and go back to what we know."

Other than a crack in his tub, after stopping out on track in FP2 with an engine issue, the Australian will revert to the Spec-B power unit, having previously been running the A-spec unit.

As ever, the popular Australian gave the news his own unique spin...

"I think it's RIP to that engine." he told reporters. "So we're going to have a little service tonight for it. It was called Pony as well, so we had to put Pony down I think.

"That was the original spec, so it was definitely just a practice engine. It would have been nice to get that to do a few more Fridays. But the word for now is that we're gonna say 'adios' and put Pony down.

"I got my first points with Pony in Shanghai," he revealed. "So she enjoyed China, loved a bit of Chinese food, strong guts, but other than that I think we'll forget about Pony tomorrow once we spread the ashes tonight."

On a more serious note he added: "This morning Nico and myself split set-ups. This afternoon we got them closer, but we're still a bit different in some areas. So we're trying to understand what's the best direction to go now. I think we'll find it. We're kind of there or thereabouts.

"There's a few other things that we did on the sim which we might give a go tomorrow, but I don't know. I don't want to change too much, but I know we need to change a little bit to get to where we want to be."