Alonso fails to qualify for Indy 500

Fernando Alonso's dream of emulating Graham Hill in achieving motor sport's Triple Crown is on hold for at least another year after the Spaniard failed to qualify for next weekend's Indy 500.

It was a torrid weekend for the Spaniard who had crashed earlier in the week, his team having already suffered an electrics issue during practice began on Monday.

"It was understeer on the car," said Alonso, "and even if I lifted the throttle on the entry of the corner, it was not enough and I lost completely the front aero. The wall came too close and too quickly.

"Unfortunately, it happened today. We will lose a little bit of running time again. I'm sorry for the team, but we will learn, and hopefully, we will come back stronger tomorrow."

On Saturday, when it really mattered, Alonso was unable to deliver as he continued to struggle with the car and failed to make the grid. However, it was subsequently revealed that the Spaniard had suffered a slow puncture which had compromised the handling of the car.

All was not totally lost however, for the Spaniard still had the Last Row Shootout in which he could yet make it on to the grid for next Sunday's race.

However, when the session got underway, having been delayed by the weather, Alonso posted the fourth slowest average speed of the six drivers bidding to make it into the race and was therefore eliminated. 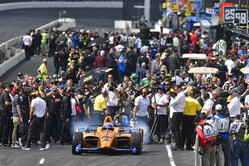 It was bitter disappointment for the Spaniard and McLaren, which, having entered the 2017 race in partnership with Andretti Autosport, had entered this year's race as a works team as it pondered a full-time return to IndyCar.

"Yesterday, we were 31st instead of 30th," said the Spaniard. "Today, 34th instead of 33rd by a very small margin, and unfortunately, we were not fast enough on both days.

"I'm disappointed now," he admitted, "obviously it would be nice to be in the race next Sunday."

"In my 35 years of racing, this is the most painful experience I've ever had but we are racers. We respect this place and it is one of the toughest challenges in racing. This experience will only make us stronger as a team, and we want to come back."

However, de Ferran, winner of the race in 2003 and two-time CART champion, ruled out talk of McLaren buying Alonso a place on Sunday's grid.

"Yes, I can comment on that," said the Brazilian. "We will not do that. We want to earn our place in the field."

"Well, I didn't spend much time with the team yet. I've been only in my motorhome and talking with friends or family,” said Alonso following the shoot-out. "Once you are not anymore in, you try to start relaxing a little bit. It has been a very long qualifying, nearly 56 hours of qualifying from yesterday morning.

"We came here to race and to challenge ourselves and we were not quick enough. I congratulate all the other guys that did a better job, and hopefully, we'll see a nice show next Sunday, with everyone safe. I will be enjoying from the TV, unfortunately."