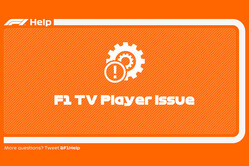 Race in, race out, the official F1 Twitter account and F1 Help account welcome each session with various rallying calls for the fans in a bid to ramp up the excitement factor ahead of another "thrilling" Grand Prix.

Not so thrilling however, is a visit to the 'replies' timeline on the F1 help account, a litany of frustration and failure.

Here, almost every single tweet contains the word "apologies" or "sorry", not forgetting "we're investigating", "thank you for alerting us" and the classic "this will be passed on to our team".

Be it F1TV or the infamous Live Timing app, for race fans - you know, those people Chase, Sean and Ross are always talking about - the misery and frustration continues week after week.

Not one single race weekend this season (or last) has run smoothly for either app, both performing at a level that makes Williams looks like Mercedes by comparison.

So bad was the F1TV performance over the Baku weekend that fans are to be given a refund, for the second time in a year.

Originally intended for release at the start of the 2018 season, F1TV was delayed until the Spanish Grand Prix in order that further beta testing could be carried out.

In reaction to the numerous issues over the inaugural weekend a refund was announced, with Chase Carey admitting that the app remained a "work in progress".

A year later and the issues continue, so much so that as fans cancel their subscriptions, F1 has announced another refund, this time following the total failure of the streaming service just a couple of laps into last Sunday's race, meaning that fans were left frustrated and helpless, unable to watch a race that had been hyped out of all proportion.

"We are very sorry for the problems you have experienced with F1TV today," said F1 in a brief statement. "We're still actively investigating the issue and we will be refunding a proportion of subscriptions for those impacted over the coming days."

Understandably this didn't go down well with fans who find that despite the cost of the app(s) their enjoyment is being compromised race weekend after race weekend.

Indeed, as one recalls Chase Carey's claim last year that F1TV would get a "proper commercial launch next season", one fan summed up the ongoing situation perfectly when he tweeted: "Is it me or are you guys selling F1TV beta testing slots as premium subscriber accounts".

Breaking all box office records at the moment is Avengers: Endgame. Imagine, if you will, movie goers not being allowed into the theatre until the movie has actually started, while others are told that the ticket they just bought in the foyer is not valid for that theatre or even a theatre in that country. Then, as they are about to take their seats, they are told to go out again and re-enter the theatre as the movie continues playing, finally to take their seats at the precise moment the power fails.

The equivalent is happening every race weekend in terms of both F1TV and the Live Timing app, and "apologies", "sorry", "we're investigating", "thank you for alerting us" and "this will be passed on to our team", doesn't cut it.

Mercedes continued domination is already threatening to hit the all-important viewing figures, and the ongoing failure of F1TV and the Live Timing app is not going to help.

In terms of the Live Timing app, which is not fit for purpose, ignoring the fact that substance has been totally ignored in F1's pursuit of style, the functionality is dreadful, as though 'development' has gone backwards.

F1TV was supposed to be the cornerstone of the sport as it moved forward under its new owners - a media company for God's sake - yet it is in serious danger of driving fans away such is the frustration at a service which still doesn't work and shows no sign of improvement any time soon.

Meanwhile, the forthcoming Disney Plus video-on-demand service which launches later this year, will have everything in the entire Disney catalogue available for a fraction of the price, and one can rest assured it will run without a hitch.

Sadly, despite the constant references to "the fans", based on the evidence thus far, certainly in terms of F1TV and the Timing App, the sport sees them as nothing more than gullible cash cows who can be silenced with a simple "apologies", "sorry", "we're investigating", "thank you for alerting us" or "this will be passed on to our team".

A much vaunted update to F1TV ahead of the Baku weekend clearly didn't impress, while the last update to the Timing App - despite the "thank you for alerting us" and "this will be passed on to our team" claims - hasn't been updated since Melbourne, and even then only for "minor bug fixes" and, ahem, "performance enhancements".