Haas tyre woes a "combination of everything" 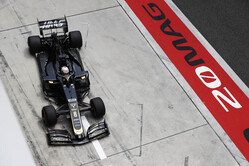 Despite a strong start to the season, certainly in the case of Kevin Magnussen, who finished sixth in Melbourne, the succeeding races have been a nightmare for the American team.

While Romain Grosjean, having endured another unsafe release in Australia, was sidelined by accident damage in Bahrain, Magnussen, who had qualified sixth, had a nightmare race.

"We were so good in qualifying so the car has to be good," he added, "but today something wasn't right and we need to work hard to try and understand what went wrong as we clearly have a good car when it's working."

Asked what the main issue was, he admitted: "I had no grip... the car just wasn't working. It wasn't switched on. It was sliding everywhere, locking-up everywhere. It was a totally different car to what we had in qualifying. It was very strange. We were slow right from the beginning, not like degradation, we were slow from the first lap. We didn't have any pace or lap time and on top of that we were slowest on the straights.

"Other Ferrari engines were flying past me on the straight so it's not that," he added. "We knew we had a high downforce package here so it's not such a big surprise but we thought we'd be fast pace wise. We were so slow and with the straight-line speed we had it was just impossible."

Sadly, the problem continued in China, and despite starting ninth and tenth following a strategic error in Q3, the pair were woefully off the pace in the race, finishing eleventh (Grosjean) and thirteenth, once again, the VF-19 experiencing major tyre issues.

"There's some work to do," said Magnussen. "I don't really understand it at the moment, we all need to understand it. It's not easy. It's frustrating that we see we've got a good car, that can qualify well, then we can't convert that into race pace.

"Qualifying's been good all year, so-far, we just need to sort out the race pace... it's the most important one to be good at. There's some work to do."

"The car's amazing over one lap," added Grosjean, "but as soon as we go two laps on the tyres, we're not there anymore.

"We need to understand exactly what happened. It's so annoying to give it all, push hard, and just not get the chance to score points."

When asked about the drop in performance, team boss Guenther Steiner was in no doubt.

"It's high-speed tracks with long straights and low-energy corners where we cannot get the heat into the tyres," he said. "In winter testing it was cold but you load the tyres a lot and you have energy to put in, and it keeps the heat in and it's fine.

"In Australia we were fine, the temperature was higher, everything worked for us. But in Bahrain and here it just doesn't work."

Unfortunately, according to the Italian, there is no single factor to blame.

Asked how the issue might be rectified, he said: "You go to the wind tunnel, you try to put heat through the tyres in one way or the other: aero-wise, brake cooling or brake heating-wise, or in vehicle dynamics-wise. But we don't have a solution at the moment. Once we have it I'll tell you how we did it.

"I think we can overcome it," he insisted, "I think we overcame a lot of things. I think we just need to work hard on it. After Bahrain, we stayed there testing and found what the issue was, but after Bahrain we didn't have any time to react because the test was finished on Wednesday. So we need to see what we can come up with now."