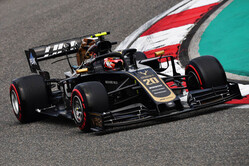 Rich Energy Haas F1 Team drivers Kevin Magnussen and Romain Grosjean earned strong starting positions for Sunday's Chinese Grand Prix by advancing to the final round of knockout qualifying Saturday at Shanghai International Circuit. The duo qualified ninth and 10th, respectively, as the American squad placed both its drivers into Q3 for the third straight race.

Q3 featured the heavy hitters of Formula One, with five-time and reigning champion Mercedes, 16-time champion Scuderia Ferrari and four-time champion Red Bull all represented. Ultimately a queue of cars and the clock beat Magnussen and Grosjean in the final seconds of the session, neither driver setting a time in Q3 having just failed to cross the start-finish line before the checkered flag. Magnussen was classified ninth with Grosjean 10th.

The Shanghai track record of 1:31.095, set last year by Scuderia Ferrari driver Sebastian Vettel in the final round of knockout qualifying, remained intact.

Romain Grosjean: "I wasn't very pleased with my first attempt in Q2, I had a big snap in turn eight, I just couldn't complete the lap. When you've got one chance, and the midfield is within two tenths of a second, it puts a lot of pressure on us. We did well, and I think we recovered very well from yesterday, so I was happy with that. Obviously, in Q3, we maybe hadn't adjusted our clocks to Chinese time. I think the car looked really good today, much better than yesterday, so I'm very happy with that. Renault looked really strong yesterday on their long runs, so let's see if we can keep up with them. We're in a pretty good position. Obviously, it wasn't ideal to not set a time in Q3, but I think the pecking order we see there in Q3 is more representative of the pecking order for the year."

Kevin Magnussen: "It was good to be in Q3, but not good to get zero laps - we just missed it. Everyone went out of the pits at the same time, I got out just a little bit late, I missed six or seven cars. I couldn't get around to cross the line before the checkered flag. I was just at the back of the queue, so I didn't get a lap. I don't think we'd have been much better if we'd had the lap, but it would still be good to try. At least we have some good tires for tomorrow. I'm not as optimistic for Sunday but hopefully we'll have a good result, we'll just have to wait and see."

Guenther Steiner: "On the positive side we've had both cars in Q3 in the first three races to start the year. That's a pretty strong showing. The last run, we didn't make it to the start-finish line in time because everyone was bunching up. We didn't make it, but if you don't take risks, well - we wouldn't have gained if we'd gone out first. We would have been ninth and 10th anyway. With our position in the garages, we were the last ones to get in the row. We didn't make it, despite our forecast. In the end it's not fantastic, but it's not the end of the world. As I said, I think we've shown ourselves to be strong in qualifying by once again having both cars in Q3."