Brawn in favour of 'Haas model' 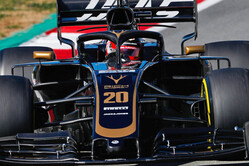 Among the various issues that need to be addressed in terms of the post-2020 regulations is that of B-teams. A number of the current participants are unhappy not only at the increasing use of 'satellite teams' that allow the bigger constructors to share technology and also give them additional political clout, but also the example of Haas in running a car that is built by another company (Dallara) along with a whole host of Ferrari parts.

The objection to what is being called the 'Haas model' comes from a number of teams, not least Renault, Williams and Racing Point, the French manufacturer particularly vociferous on the subject.

F1 technical boss, Ross Brawn, whose own championship winning team, which subsequently morphed into Mercedes, could trace its own ancestry back to Tyrrell, whose first seasons in F1 were contested with a Matra and then a March, is a fan of the 'Haas model'.

"The Haas model is interesting," he told Sky Sports. "It has been very successful and it's something we have to maintain for the future, for it to be possible for a small team to be able to come in and be pretty respectable.

"There is some trimming we need to do to what they have been able to do," he admitted, "(but) I don't see a big change in the Haas model."

"There are grey areas we need clarity on. Haas is a good model, we don't want to spoil it, but we want to make sure of its place in F1."

While Haas team boss Guenther Steiner is delighted to hear he has Brawn's - and thereby Formula One Management's - support, he knows that this isn't for altruistic reasons but rather the fact that the 'Haas model' is a way to encourage new teams to enter the sport.

"We are all egotistic obviously and somebody is a referee," he continued, "and they need to look after the business that we have enough teams here that can fight at an equal level. If you have got three teams that are two seconds ahead, then you have got teams that are two or three seconds behind and another group of people who are two or three seconds behind them, what fun is that? How long can that exist?

"We need to close the gap and that is one of the ways to do it. If people like it or not they just need to do a better job. Then we are fine."

Indeed, the line about teams needing to "do a better job" was used in Bahrain by Toro Rosso boss Franz Tost, when asked about B-teams.

"So, the reason why Toro Rosso is so competitive is mainly because of the fantastic power unit which we have from Honda," he added. "It seems that others are not doing such a good job and therefore they should not complain and whingeing around. They just should do their job. We have a good package together with the car, fantastic drivers and a fantastic power unit from Honda, that's the reason why we are competitive."