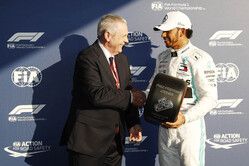 Speaking to Sky Sports at the weekend, F1 managing director Ross Brawn admitted that the sport's powers-that-be are looking to streamline race weekends.

"There are some things in the next year or two that we will do," he said.

"We are working on a qualifying format which is similar to what we have now," he continued, "you'll get elimination and still have the top cars fighting for the top places, but you get more action, so we have an hour of intense action."

It's understood the format under consideration would see qualifying run in four phases as opposed to the current three, with four drivers eliminated at the end of Q1, Q2 and Q3, thereby leaving 8 drivers to battle for pole in Q4.

It's a format previously revealed by the late Charlie Whiting.

"It's more something that's come from F1," he said, last year. "They've been doing a lot of research among fans, and they feel this is one of the things that the fans would like.

"Slightly shorter, slightly shorter time between them, four go out in Q1, four, four, leaving eight. I personally think it's quite a nice idea, but that's not my decision."

"We are looking at how we streamline the weekend for teams but not in terms of track action," said Brawn. "We want to have two or more three races per season, but we think we can do that by not overstressing the teams by trying to refine their weekends.

"To give you an example, there is a curfew, a limit on the hours teams can work on Friday night and Saturday night but not a Thursday, so they all work all night on Thursday to get ready.

"We are trying to crank it up a bit more," he continued. "We need to improve the way we operate. At present crates come in at all times of the day full of new parts... we can stop that. We can say the car that turns up is the car they race.

"It saves all that freight, all that work that is done over a race weekend."